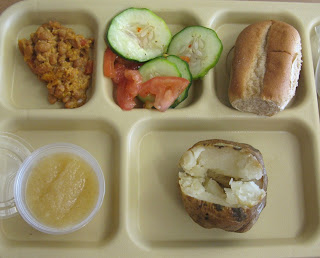 In the federally-subsidized school lunch program, potatoes qualify as vegetables. That's how you end up with a tray like this, jammed with starches in the form of baked potato, bread roll and beans. Add the sugar in the apple sauce and you have quite a glycemic load. (Thankfully, the apple sauce has no added sugar, just what occurs naturally in the apples.)

Actually, what Chartwells called this on its menu website was "baked potato with vegetable chili and low-fat cheddar cheese." That explains what those beans are in the upper left, because the kids weren't sure what they were (baked beans?) or whether they wanted to eat them (strangely sweet).

I did not see the cheddar cheese, but maybe it was already stirred into the beans. 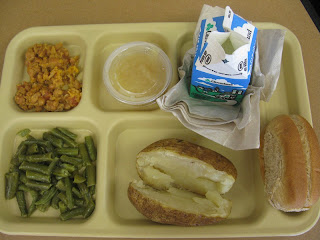 Also on the menu were "seasoned green beans," which translates as green beans out of a can. Thus, here's another version of this lunch, with the green beans but without the salad of fresh cucumbers and tomatoes. 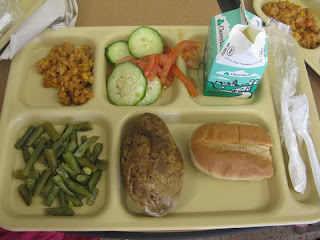 And here's yet a third version, without the applesauce. Schools that follow the U.S. Department of Agriculture's food-based menu plan must offer five items at lunch. To reduce plate waste, school district must allow high schools an "offers versus served" option, meaning kids only need select three of the offered items to qualify as a federally-subsidized "meal." But they can take all five if they want, as this particular fifth-grade girl did. Here in the District of Columbia, kids in all grades get the "offered versus served" option.

The kids really liked the baked potato, even though there was no dressing for it. (Where's the sour cream? my daughter wanted to know.) What they didn't eat so much were the "chili" or the other vegetables. The best thing on this tray by far was the "locally grown" cucumber and tomato salad. The cucumbers were crisp and cool, the salad perfectly dressed. I could have eaten it all day. But not many kids had it on their trays, and those that did didn't really touch it before it went into the trash.
Posted by Ed Bruske at 12:01 PM