A Community Rallies Around School Food 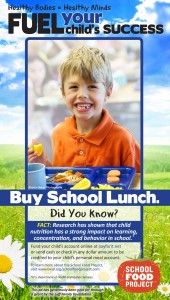 "Dear Parents of the Boulder Valley School District," the appeal begins. "Things are going well, but we need your help. We need at least 30 more kids in each school to start eating lunch so we can sustain our program."

So a recent letter from Ann Cooper who is trying to close a $360,000 budget gap in her makeover of school meals in Boulder. She's upended the menu, replaced cheesy pretzels and Eskimo pies with chicken pot pie and pasta Bolognese, she's brought in a crew of professional cooks and aligned the kitchen's computer system with the 21st century. Now all she needs is about 1,000 more kids to open their wallets and start buying lunch instead of bringing it from home.

She wants an army of parents to help.

In response to that letter, 176 parents volunteered to join in the battle to convince kids to eat the new and healthier meals. That's in addition to more than 30 unpaid interns who visit the schools to conduct tastings and coach students on the new food.

Whether it's volunteering in the schools or writing checks to pay for kitchen equipment and training, Boulder residents have stepped up to make their school food revolution happen. Cooper couldn't have gotten this far without them. But she still has a ways to go.

School board member Virginia Belval, who says she used to be "secretly horrified" by the processed convenience foods Boulder schools served before Cooper arrived, represents a suburban area where participation in the meal program remains low. "Nobody wants to serve their kids unhealthy food," she says. Still, her constituents have concerns about the consistency of food quality in school cafeterias and also the expense. "I would take it a step beyond that, " she said. "How kid-friendly is this food?"

"It doesn’t sound like a lot to pay $2.75 or $3 for a lunch. But I might think, wow, I could make a peanut butter and jelly sandwich and some celery sticks and save some money over the course of a week."

Coordinating volunteers to push the case for the revamped menu is a recent college graduate and Cooper acolyte, Sunny Young. Originally from St. Louis, she saw Cooper speak at a sustainable food event and was moved to ask for a job. "She said, 'Well, I'm always taking interns,' and she handed me her business card. I carried that card around with me for almost two years," Young recalled. After a year abroad in Madagascar, she called Cooper looking for that internship and moved to Boulder, waiting tables to pay the rent, taking meals in school cafeterias to augment her food budget. 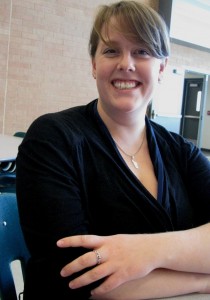 Now Young works out of an office near the maintenance shop at school district headquarters, her salary paid jointly by the schools and a $150,000 grant from the Colorado Health Foundation aimed at increasing participation in the federally-subsidized meal program in Boulder schools identified as having low participation rates.

Taste-testing new menu items, Young said, has been especially successful. "It's guaranteed: you get 15 more kids to eat lunch from every tasting," she said. At one elementary school in particular, Young has arranged three tastings for things like pasta in a garlicky cream sauce, burritos or taboulleh. "It's worked so well that we want to do it with every menu item. We're planning to do shepherd's pie next."

One of the interns involved is Erica Goodman, a graduate student in journalism at the University of Colorado, Boulder, who grew up on a dairy farm in upstate New York and is particularly interested in food issues. "I wanted to learn more about what they were doing here that might help me connect my family’s farm with schools," Goodman said. Her assignment is to target schools with low lunch participation rates, find the kids who are bringing lunches from home and offer them samples of the food being sold in the meal line.

She stalks the cafeteria with trays full of pasta or taboulleh in litle paper dispensers.

Taste-testing a new pasta dish in the cafeteria

"Kids who bring lunch, they remember the old menu items and didn’t like it and don’t want to try what we have to offer," Goodman said. "Some see a chicken thigh and what they want is a nugget.'

Overall, Goodman thinks the response to the new food so far has been positive. "There’s definitely enthusiasm when there are good items on the menu. I definitely get a good vibe, and especially with the younger kids. I think they’re more open to try new things than the older kids."

Sally Handy is a former school teacher from Vermont who moved to Boulder around the same time as Ann Cooper when her husband got a job teaching law in Denver. She'd been following Cooper for years and wrote a number of letters trying to get a job with the School Food Project to no avail. Then she got tapped to coordinate other parents who had volunteered to help conduct tastings and otherwise coach students about healthier food choices.

Handy and many other parents I spoke with said they welcome a chance not to pack a lunch if there's a healthy alternative at school. "I’ve been packing my kids lunch for years and I was thrilled when this came about," Handy said. "I really see my participation as a commitment to the community, a community service in a way. Because the more people who participate, the better the food can be."

Handy's own 12-year-old daughter is torn because she waits in the food line while her friends are already eating the lunches they brought from home. "I'm the one insisting she do it--wait in line for the lunch," Handy said. "But she's coming around. In middle school, it's a cultural-social issue."

Other parents have help by donating money. Cooper originally projected that Boulder's School Food Project would require between $750,000 and $1 million in private donations to pay for upgrades to kitchen equipment and staff training. For instance, she spent $45,000 to enroll her staff of more than 150 kitchen workers in a ServSafe food safety course. Another $100,000 was spent to retrofit five production kitchens. Refrigeration and heating equipment for the kitchens required an outlay of another $250,000, Cooper said. 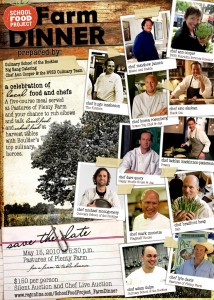 Ad for farm dinner and auction

Some of the money has come from local philanthropists. The regional Whole Foods contributed around $100,000. Fund raising events continue on a regular basis. A dinner at a local farm in December featured a menu groaning with items donated by Boulder's chefs: Colorado bison with a sasparilla reduction, farro and arugula with cumin-scented yogurt, local mushroom with roasted onion, scapes and ramps, wild blueberry and rhubard crisp.

One of the items at a live auction was a whole hog donated by a local farmer. In response, a local butcher auctioned a short course in how to turn that hog into roasts. The auction raised more than $10,000.

Boulder chefs are currently engaged in a series of fund-raising dinners where contributors get to sample cutting-edge culinary fare. 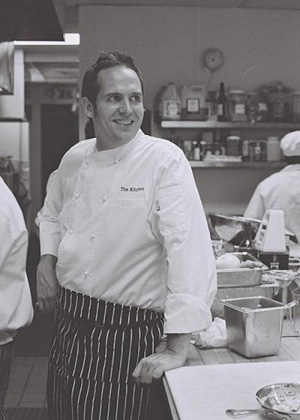 Hugo Matheson is the father of twin 7-year-old boys who attend Boulder schools and co-owner of a popular bistro called The Kitchen. He has actively supported school gardens in Boulder, and now has thrown his weight behind Ann Cooper's cafeteria re-design. On Mondays, The Kitchen holds "community nights," when 20 percent of sales from a fixed-price $35 menu go to the School Food Project and the Growe Foundation.

"There’s still a wee way to go, but I see more kids accepting the lunches," said Matheson. "That was the biggest challenge, getting kids and parents to believe that this food really is good. My kids complain that we don’t have the waffles and chicken nuggets any more. But we’ve definitely seen an increase in popularity and excitement around the food. There’s a sense of community when everybody sits and eats the same thing."

Sixty-five supporters attended one fundraiser at The Kitchen where Ann Cooper spoke. They dropped checks worth $65,000 in the School Food Project kitty that day.

Meanwhile, Sylvia Tawse, one of the parent activists who originally convinced Ann Cooper to take on the school food challenge in Boulder, uses her public relations firm--Fresh Ideas Group--to promote the cause. Her staff is involved not only in promoting various fund raising events, but in designing and placing an ad campaign aimed at boosting meal participation. This fall, a four-week advertising blitz began airing during prime drive-time hours on the radio. The local daily newspaper agreed to publish two full-page ads for every one the food project purchased. "Fuel You Child's Success," the ad declares. "Buy School Lunch."

A private family foundation paid the nearly $14,000 cost of running 18 separate ads, Tawse said, in addition to thousands of dollars worth of hours she and her staff have donated to the cause.

"In the past few years we have only worked 100 percent pro bono for School Food Project, whether it be serving as the event manager for our School Food Project Farm Dinner, which was hosted out at our family’s farm, or our work on other fundraising efforts such as the chef dinners, which are ongoing." Tawse said. "I don’t know total hours over the years, but I’d guess it is in the hundreds of hours range annually. The farm dinner involved more than $15,000 in staff time." 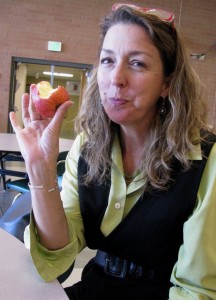 They've also used the local newspaper to publish coupons for free lunches in the schools, paid for by an anonymous local donor. Coupons were also being distributed in elementary schools on Fridays. "I think we've redeemed 5,000 of those coupons already," Cooper said. Cooper's kitchen crews are even trying to make converts out of the district's athletes. They've been feeding Boulder's football teams at home games and when they travel. Students have signed up for "iron chef" competitions to develope recipes that can be served in the cafeterias. The winners so far: sloppy joes, jicama slaw and baked potatoes stuffed with cheese and broccoli.

So is it working? Are Boulder's kids buying the new and improved school food?

The day I visited Casey Middle School, where the a la carte line has been dismantled and the choices were re-designed nachos and hamburgers on whole wheat buns, the kitchen served 223 lunches, compared to 149 a year ealier. At Columbine Elementary School the following day, the lunch laides dished up 296 slices of freshly-made pizza, a new record.

"I've just had one school meal so far and I thought it was pretty good," said school board President Ken Roberge. "But my wife who is very picky about what she eats, and she's a substitute teacher, has told me she would never think of making her own lunch any more because the food is so good."

According to Cooper, who closely monitors meal participation district-wide, the numbers look good. She may manage to break even this year, ahead of schedule. It took her three years when she remade the food in Berkeley, Calif.

"It's still too early to tell," she says. "We have to make it through the holidays first."

Next: Lesson from Boulder