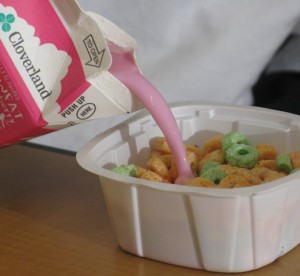 In a development that could finally crack the code of silence surrounding rebates in school food service, lawyers for D.C. Mayor Vincent Gray have reversed a longstanding decision by local school officials and ordered the release of data showing how much money food manufacturers pay in rebates in order to place their products on children's cafeteria trays in the nation's capitol.

The decision comes in response to an administrative appeal I brought before the mayor after attorneys for D.C. Public Schools denied access to the rebate information on grounds it constituted "trade secrets" that could, if disclosed, harm the competitive position of the schools' hired food service provider, Chartwells.

I originally had sought the information more than a year ago through the city's Freedom of Information Act in an effort to determine the extent to which rebates might influence the choice of food D.C. schools serve. As a result of my FOIA requests, I was able to determine that Chartwells had claimed receiving more than $1 million in rebates from food manafucturers during the second year of its contract with the schools. However, the schools, citing a "trade secrets" exemption to the FOIA law, refused to release an itemization of which manufacturers had paid the rebates. The schools also declined to release detailed contract proposals submitted by Chartwells and Sodexo in the original bidding process.

John F. Carroll, an assistant New York attorney general invesitigating rebates in that state, has said the manufacturer discounts pose an "inherent conflict of interest" in school food service because they provide a financial incentive to choose highly processed and often sugary products over healthier foods. They also encourage purchases of large, national brands over locally produced goods that might be less expensive and more healthful, but do not pay rebates.

My own investigaton of school food in the District of Columbia showed that children routinely were being served the equivalent of 15 teaspoons of sugar in the morning in the form of popular branded products such as Apple Jacks Cereal, Pop-Tarts, Giant Goldfish Grahams and Otis Spunkmeyer muffins, along with chocolate and strawberry milk. D.C. schools have since stopped serving those products, removed flavored milk from the menu and otherwise taken steps to lower the sugar in school food.

The rebating practice is pervasive in the food industry and in school food service, especially where large food service management companies such as Chartwells, Aramark and Sodexo are involved. But while rebating no doubt generates billions of dollars to grease the wheels of the processed food industry, precise information about the practice is a secret closely guarded by manufacturers as well as those who benefit from the cash it produces. Essentially, the manufacturers write checks to companies who purchase their products in large volumes. Chartwells' parent company, the $22 billion international conglomerate Compass Group, maintains an entirely separate entity called Food Buy solely to write purchase contracts and collect rebates generated by its many subsidiaries.

Under the federal school meals program, food service companies retained through "cost reimbursable" contracts must pass any rebates they receive to their school district clients. After I tallied the rebate amounts Chartwells had declared on its monthly invoices to D.C. schools, it was revealed that school officials had asked Chartwells for an itemized accounting of the rebates but had been waiting nine months to receive one. School food services Director Jeffrey Mills was said to be troubled by the rebates and their influence over Chartwells' food purchases.

As a result of the ongoing investigation in New York, Sodexo last year agreed to pay $20 million to settle claims that it had failed to reimburse schools and other government clients for the rebates Sodexo had received. Subsequently, D.C. Council member Mary Cheh (D-Ward 3), author of a "Healthy Schools Act," asked the city's then-attorney general, Peter Nickles, to assist the schools in recovering any rebate monies they might be owed. Cheh also oversees implimentation of the District's FOIA laws.

Information about rebates is so sensitive that the School Nutrition Association, which counts Chartwells and other food management companies as well as numerous manufacturers as members, removed from YouTube a taped version of a speech Carroll delivered to the group in March. In that speech, Carroll disclosed that rebates typically generate checks from manufacturers worth 10 percent to 15 percent of all food purchases. Some items are rebated up to 50 percent of the purchse price.

In Denver earlier this year, representatives of the Service Employees International Union were ejected from a conference held by the American Association of School Administrators because they were distributing information about school food rebates and planned to hold a workshop on rebates in school contracting. Aramark and Chartwells were both sponsors of the event, and Sodexo lists itself as one of the association's "strategic partners."

In a letter to me dated May 26, the mayor's deputy general counsel Donald S. Kaufman wrote that attorneys for D.C. schools had erred when they invoked the "trade secrets" exemption to my FOIA request without showing how releasing the rebate and contract information would "result in substantial harm to the competitive position" of Chartwells, a requirement of the D.C. FOIA law.

"DCPS has not pointed to any authority, nor are we aware of any, which holds that the amount or source of rebates or volume discounts is, as a matter of law, protected commercial or financial information for the purposes of FOIA, nor is it apparent that the disclosure of such information would result in competitive harm," Kaufman wrote.

"The response of DCPS is insufficient to justify the withholding of the documents," Kaufman wrote in this "final decision" of the mayor's office. "The documents must be provided to Appellant," meaning me.

Under the D.C. FOIA, decisions by individual city agencies can be challenged in court, or appealed administratively directly to the mayor. I chose to appeal to the mayor. I suspect that Chartwells may now be contemplating a court filing to block release of the rebate information.