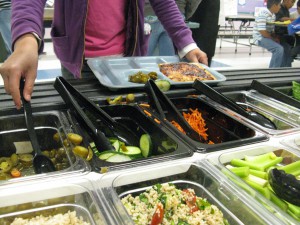 The Slow Cook has learned that the U.S. Department of Agriculture will not back away from proposed guidelines for more expensive school food despite demands from Republican lawmakers that the agency eliminate any requirements that would increase the cost of the federally-subsidized school meals program.

The GOP-controlled House Appropriations Committee recently attached language to a funding measure for agriculture programs directing the USDA to rewrite the proposed school meal guidelines so that they do not create any additional costs. The USDA has estimated that the proposed guidelines as currently written [PDF], calling for much larger servings of vegetables and whole grains and less salt, would require schools to cook more food from scratch and would raise the cost of a subsidized lunch by 15 cents, breakfast by more than 50 cents. The result would be some $7 billion in additional expenses over five years, to be paid mostly by state and local governments that are still reeling from the worst financial crisis since the Great Depression.

But the USDA believes the appropriations language cannot undo the Healthy Hunger-Free Kids Act approved by Congress last December, which mandated new meal guidelines. The guidelines were the result of years-long study by the Institute of Medicine. USDA officials consider them to be "science based," and do not intend to rewrite them in response to what they see as an arbitrary and perhaps politically motivated move by conservative lawmakers.

The proposed guidelines recently underwent a public comment period that generated some 130,000 responses. The USDA in coming months may modify the guidelines. They could be in place as early as fall 2012.

In passing its re-authorization of the school meals program, Congress approved a six-cent hike in the federal reimbursement rate for lunch, but only for schools that comply with the new guidelines. The USDA currently provides schools with $2.72 for every student who qualifies for a free lunch. About 32 million of the nation's children participate in the subsidized lunch program daily.

In fact, the House directive aimed at meal guidelines was not contained in the appropriations bill, but rather in the committee's report []PDF] on the bill. The report, which serves as an explanatory text, travels with the bill through the legislative process. In some cases such committee reports contain language giving specific directions to government agencies. Agencies of the executive branch may follow Congress' wishes. But such directives do not carry the full force of the law and in this case the USDA would choose to ignore what GOP House members have demanded.

The report states: "The Committee urges restraint and practical timeliness for implementing new national nutrition standards in the school brakfast and lunch programs. As many of the representatives in states and local school districts have cautioned, an overly aggressive implementation schedule and unrealistic demands on changes in nutrient content can lead to burdensome costs, estimated to be about $7 billion over 5 years. Therefore, the Committee directs [USDA Food and Nutrition Services] to issue a new proposed rule that would not require an increase in the cost of providing school meals."

The language was expected to be approved by the full House when it takes up the agriculture appropriations measure, but is not likely to survive reconciliation with the Democrat-controlled Senate.

The Institute of Medicine panel that wrote the proposed guidelines cautioned that there was no guarantee children would actually eat the "healthier" foods the USDA is calling for. School food service directors have urged that the new requirements be pilot-tested on a small scale before being mandated nationwide. Some have said they may have to drop their breakfast program because of additional food costs.

The GOP House appropriation for agriculture programs has also drawn fire from the Obama administration and the advocacy community for rolling back spending on food entitlement programs such as WIC (Women, Infants and Children) and others serving seniors. It would also curtail funds for food safety inspections.

The action on school meal guidelines was probably intended more as a political message for consumption by the party's conservative base. Cost cutting has become the GOP mantra. It also favors corporate food interests, which would just as soon see meal guidelines unchanged and schools reliant on cheap processed products, rather than the kind of whole foods the new guidelines call for.

Nevertheless, the appropriations committee directive has caused much hand-wringing among advocates of healthier school food. Media accounts thus far have failed to adequately explain the actual impact of the committee action, and the USDA has remained silent.