And Now for Some Good News About School Food: Breakfast in the Classroom 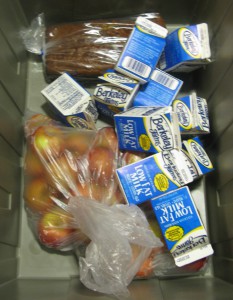 Berkeley's breakfast in a bin

When I worked in Berkeley's central school kitchen a year ago one of the things that impressed me most was something I'd never heard of before: breakfast served in the classroom.

Every morning at the crack of dawn we'd start loading plastic bins. The meals were so simple: a loaf of banana bread, a bag of kid-size apples, cartons of plain milk. Sometimes there might be yogurt, or packets of Nature's Path organic cereal. At Martin Luther King Jr. Middle School, the bins were rolled out on shelves to the front of the "dining commons" where students soon arrived in pairs to carry them to their classrooms.

It couldn't have been easier. Yet participation was nearly 100 percent, and because of a quirky California real estate tax law, breakfast in Berkeley generated "meals for the needy" funds on top of federal subsidy dollars, helping to pay for a scratch-cooked lunch.

When I left Berkeley, I wondered why every school district hadn't thought of breakfast in the classroom. But now many of them are. In fact, this may be the hottest new trend in school food.

"Breakfast is such a winner on so many levels. But it’s a federal program that’s underutilized," said Madeleine Levin, a senior policy analyst with the Food Research and Action Center (FRAC), which advocates on food access issues in schools. Most schools offer breakfast, but fewer than half of all children eligible for a free or reduced-price breakfast actually eat one. Last year 1.97 billion breakfasts were served in the federally-subsidized meal program nationwide, fewer than half the number of lunches--5.28 billion.

FRAC last year was one of several groups--including the National Association of Elementary School Principals Foundation, the National Education Association Health Information Network, and the School Nutrition Foundation--that partnered to help start classroom breakfast programs in five school districts: Dallas, Little Rock, Memphis, Prince George's County, Md., and Orange County, Fla. They received $3 million from the Walmart Foundation, about $2 million of which went to the schools, mostly to pay for equipment, such as refrigerators and coolers.

"Some principals felt uncomfortable changing their routines, as did some teachers and food service directors. We were able to address those groups at the school level to show them how this can work, how there can be a constructive process to plan and implement a program that benefits everyone," said Levin. "The power of the funding was to meld the partnership together."

According to Levin, it doesn't take much to start a classroom breakfast program. Yet research demonstrates that when children gather around breakfast in a familiar classroom setting, readiness to learn increases while tardiness and discipline problems decline. Eating breakfast also fights obesity. "It will benefit them for the rest of their life," says Levin. "It's proven in research to have a real impact." 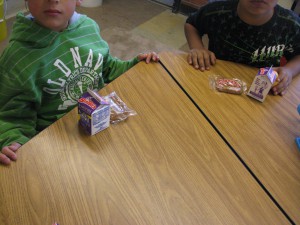 Nothing beats breakfast at your desk

Here in the District of Columbia, there's been a marked increase in the number of children eating breakfast since breakfast in the classroom was implemented a year ago. Breakfast is served free to any D.C. Public Schools student who wants it. In 37 elementary schools where breakfast is served in all classrooms, participation stands at 78 percent, an increase of 26 percent from the year before. Meanwhile, in elementary schools that serve breakfast only in the cafeteria participation is just 10 percent.

D.C. Hunger Solutions has been working closely with local schools to make the new breakfast program a success.

Levin doesn't advocate breakfast in the classroom as a money maker, but school food consultant Kate Adamick does. Especially in districts with large numbers of needy students, federal subsidy dollars can more than pay for breakfast, meaning extra cash to help support the entire meal program. In "severe need" schools, the federal reimbursement rate is $1.76, compared to the usual $1.48.

Adamick says the break-even point for schools typically occurs when at least 50 percent of the student body qualifies for a free or reduced-price meal. "For districts that exceed 60 percent free and reduced, breakfast in the classroom programs generally result in significantly increased net revenue for school districts," Adamick said. "The higher the level of free and reduced kids, the higher the net revenue generated."

Schools can increase the profitability of breakfast by cooking more from scratch, Adamick says. "The good news is that simple scratch-cooked breakfast meals are often much less expensive than the highly processed products that are currently served in most schools, which helps keep the costs in line and lowers the free and reduced levels necessary for a financially viable breakfast in the classroom program. "

The USDA's proposed new meal guidelines could upend that math, however. By requiring more whole fruit, whole grains and adding a 1-ounce serving of meat (or meat alternate), the guidelines would add a whopping 51 cents to the cost of serving breakfast. Some school administrators say they may have to drop breakfast altogether. 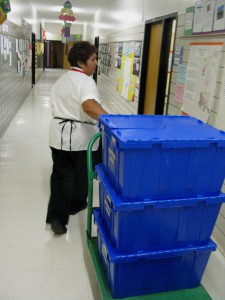 I watched the kitchen manager, Margaret Traverton, load bins with apples, breakfast bars, and milk, then wheel the bins around the school on a cart, dropping them outside classroom doors. I went back a few minutes later to watch the children unload the bins and arrange breakfast at their desks. Assigning kids tasks--like unloading bins, or collecting trash--gives them a sense of responsibility, and takes some of the load off the teachers.

Chicago instituted breakfast in the classroom in all of its schools this year, sparking loud complaints. But Levin attributes the discontent there to requiring that breakfast be served in classrooms in even the most affluent schools, where many children may not need it. "The concerns are coming from a small group of parents," said Levin. "In other districts where they’ve gone district-wide it’s worked really well—Houston and Newark, for instance.

Here in D.C., schools where less than 40 percent of students qualify for free or reduced price meals can opt not to serve breakfast in classrooms. It's offered in the cafeteria instead.

Levin says many other school districts are exploring the breakfast-in-the-classroom option. FRAC has received more than 100 inquiries just from its website. But the next frontier is getting older kids interested in eating breakfast. At one high school here in D.C., I met with students who would rather grab a bag of chips at a corner convenience store than eat a breakfast for free at school.

"If you talk to marketing people they’ll tell you that making something free doesn't necessarily make it attractive," said Levin. "It’s not cool. Or to use a more modern term, it’s not 'fresh.' They’d rather hang out in the hallway with friends."

In D.C. last year, middle school participation in breakfast was just 21 percent. It was even less among kids in high school: only 11 percent.

So how do we make breakfast "fresh?"

This article originally appeared at the Beyond Breakfast blog.