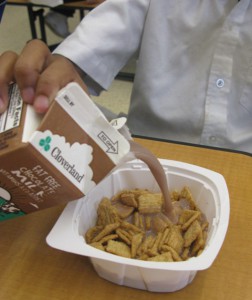 Not coming back to D.C. schools

D.C. Public Schools officials apparently have no intention of reinstating chocolate milk in local cafeterias despite a recent grilling by D.C. Council Chairman Kwame Brown and the pleadings of a first-grader who polled his fellow students.

In an e-mail to Brown dated June 22, newly-confirmed schools Chancellor Kaya Henderson says the decision to remove chocolate and strawberry-flavored milk from schools was part of an ongoing effort to make school food healthier, that the sugar in flavored milk puts many students at risk of obesity and heart disease, and that not serving more expensive flavored milk frees money that can be used to improve the the quality of meals served.

During recent confirmation hearings before the council, Brown tried to get Henderson to commit to bringing flavored milk back to city lunch lines based on findings of a 7-year-old student at Lafayette Elementary School that 58 percent of his school mates do not drink milk. "Kids won't drink milk unless it's chocolate," Brown said. The boy questioned why chocolate milk had been removed when schools continue to serve fruit juice that contains as much sugar as flavored milk, but not the protein.

In her e-mail to Brown, Henderson noted that Los Angeles schools, the second-largest school district in the country, recently opted to remove chocolate milk and that other school districts appear poised to do so as well. As for juice, Henderson said the sugar in fruit juice occurs naturally, unlike that added to flavored milk, and that juice is only served once per week in D.C. schools as a replacement for whole fruit.

A debate over the chocolate milk issue played out recently in Washington Post reporter Mike DeBonis' column after I broke the news in this blog about Kwame Brown's interrogation of Henderson. The father of the Lafayette Elementary student, Chris Murphy, wrote DeBonis insisting that his son "is not a dairy lobbyist." But a copy of the boy's testimony has since been widely circulated by the National Dairy Council as evidence that kids prefer chocolate milk to plain milk and risk not getting enough calcium to build healthy bones without it.

Chocolate milk has become a flash-point issue in the battle to improve the quality of food served in the nation's schools. The dairy industry spends tens of millions of dollars promoting chocolate milk as an alternative to soda and other soft drinks. While sales of plain milk have plummeted in recent decades , sales of flavored milk have tripled. But some health experts have become concerned about chocolate milk's roll in promoting children's consumption of sugar and say that kids can get the calcium they need from a range of other foods.

My reporting of D.C. school food indicated that as recently as a year ago, children were being offered the equivalent of 15 teaspoons of sugar with breakfasts in which chocolate and strawberry-flavored milk were served alongside Apple Jacks cereal, Pop-Tarts, Giant Goldfish Grahams, Otis Spunkmeyer muffins and fruit juice. Under the aggressive approach taken by food services Director Jeffrey Mills, schools have removed not only flavored milk, but also sugary cereals and processed foods.

Henderson says the response to D.C. schools removing flavored milk "has been positive."

Here is the full text of Henderson's e-mail to Brown:

In response to the discussion that arose during my confirmation hearing, I would like to share information with you about our decision to eliminate flavored milk from our menus.

The decision to stop serving flavored milk in DC Public Schools (DCPS) was made in support of our goal to serve healthy, natural foods to our students that are additive, artificial flavoring and coloring-free. This change was implemented, beginning last summer, in conjunction with new DCPS nutrition standards. Our new standards require that all menu items and competitive foods comply with the Institute of Medicine (IOM) standards, the federal HealthierUS Schools Challenge Gold Standard, and with our own district-specific standards which regulate/restrict sugar content in our meals.

Flavored milk contains significantly higher amounts of sugar and sodium than plain milk. An 8-ounce carton of flavored milk contains 14 grams (approximately 3 ½ teaspoons and 64 calories) of added sugar per serving. The American Heart Association recommends that no more than half of an individual’s discretionary calories come from added sugar. For young girls ages 9-13, for example, 8 ounces of flavored milk would constitute nearly a whole day’s added sugar allowance. Considering the fact that DCPS offers three meals a day, it is feasible that some students would choose to consume three cartons of flavored milk, thereby exceeding their recommended daily sugar intake by 128 calories. Other American Heart Association research cautions that the average child consume over 20 percent of their daily calories in the form of sugar, a habit that undoubtedly contributes to heart disease and obesity-related illnesses.

To the point that some have made about the amount of sugar in fruit juices, we mention that the sugar in juice occurs naturally, that all of the juice we serve is 100% juice, and we only serve it once per week as a replacement for fruit. Additionally, the amount of protein in milk does not vary between flavored and unflavored; some milk products have added milk solids (protein), but this additive is not unique to flavored milk.

DCPS currently serves only skim or 1% plain milk. Despite removing flavored milk and making significant menu changes, we are on track to serve nearly 2.5 million more meals this school year than last, meaning 2.5 million more milks have been purchased. Flavored milk also costs approximately $.05 more per carton than plain milk; and so, the additional volume comes at a cost savings to the District, allowing us to funnel more resources into buying more high-quality, healthy foods for our children.

Our Office of Food and Nutrition Services (OFNS) has been tracking district policies around flavored milk across the country. Just last week, Los Angeles Unified School District, the second largest in the country, stopped serving flavored milk, and according to indications within the school food service community, many other districts are planning to pull it in the coming school year.

While we do not take lightly the advocacy of our students, we also know that the District ranks 9th among all states with high overweight and obesity rates among adolescents ages 10-17 (DC DOH 2010 Obesity Report). It is also important to note that the majority of feedback we have received from the DCPS community regarding the decision to eliminate flavored milk has been positive. Spurred in part by the Council’s own nationally-recognized Healthy Schools Act legislation, we at DCPS have been working aggressively to develop nutritional health and fitness initiatives and approaches to help combat this challenge. Through this and other changes, DCPS hopes to give students the gift of a healthy palate and an active mind.