The Salad Bar Story that Wasn't 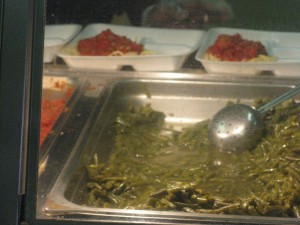 Do these beans look appetizing to you?

I had meant to end another year in school food on an up note with a report about the salad bars being installed in some D.C. schools. A few of the 128 schools in the system now have salad bars, thanks to grant programs like the one Ann Cooper was running last year in partnership with Whole Foods. That has since turned into a much more substantial effort with the White House, the U.S. Centers for Disease Control and produce growers called Let's Move Salad Bars to Schools.

I took the subway to an elementary school just a few blocks from the capitol dome expecting to take photos of a salad bar in action. But when I arrived, the salad bar was completely empty. I was told that no produce had been delivered that day. Subsequently I learned that being the last week of school, Chartwells to cut down on food waste had not ordered produce for the salad bars.

What the kids were eating instead were hamburgers and canned green beans like the ones you see in the photo above. Or perhaps I should say what they were not eating were the green beans. I often wonder whether kids in other parts of town have the same vegetable-averse lunch habits as the ones at my daughter's school, located in a more affluent neighborhood. Maybe I should not be so gratified to learn that--yup--kids over here on Capitol Hill dislike green beans just as much as the kids in Glover Park.

I took a stroll around the cafeteria to confirm and did not see a single child eating the green beans. Too bad, since canned green beans are much more flavorful than the fresh variety. They just don't look as sharp as beans that have been barely cooked, then "shocked" in cold water to keep them bright green--the way Julia Child might cook them.

I think of this every time the matter of the USDA's proposed new meal guidelines come up and all those extra servings of green vegetables they call for. Will the kids eat them? Why would the kids eat them, if they're not eating them now?

As soon as school starts up again in the fall, I'll have a report on salad bars. Because from what I've seen in other school districts, salad bars do engage kids in making better meal choices--including, obviously, vegetables.