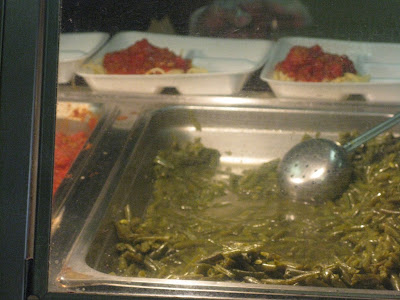 By Ed Bruske
aka The Slow Cook
I've been meeting lately with a small group of students at a D.C. high school in hopes of developing a journalism project that looks at food service and kids' eating habits. One thing that leaped out at me during our talks was the fact that most of the students do not bother eating breakfast at school even though it's free.
Why would kids turn down a free meal? With the help of their teacher, we've turned that into a survey the students in my group say they will administer to their friends to determine where and what kids are eating in the morning and what it is about breakfast at school that turns them off.
Having lived in the city for many years, I'm quite used to seeing kids walking to school with a bag of chips in one hand, a jumbo soda in the other. Convenience store dining is de rigeur in these parts.
Meanwhile, last week we had our first outing in the school cafeteria, a place my group seldom ventures. Why? Well, the subterranean feel of the place--absence of windows, low ceilings, exposed pipes--for one thing. And there doesn't seem to be any particular line or order around the steam table. It feels more like a mosh pit, with kids pressing together, jockeying for position.
The kids in my group would just as soon avoid the whole scene.
Here you see the canned green beans on display last Thursday. Does this look appetizing to you? Plus, there was no real sense of urgency behind the steam table. Getting served seemed to take forever while the food just sat there. 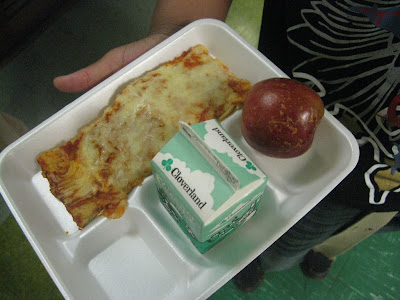 Here's what one kid's tray looked like. No surprise: these kids want pizza, just like kids everywhere. In high school, the students only have to take three of the five items offered to constitute a reimbursable meal for purposes of the federal school lunch program. That's called "offer versus serve," to cut down on waste. 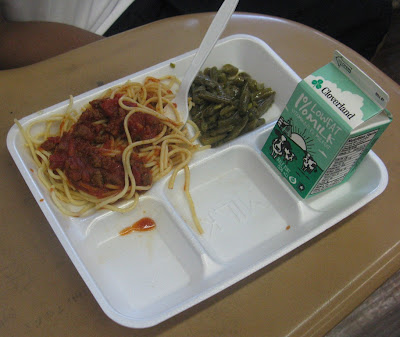 Here's the other option: pasta with marinara sauce. I noticed the high schoolers were being served traditional spaghetti noodles, while the kids at my daughter's elementary school now get only "whole wheat" pasta. I wonder if there's a reason for that. Do high schoolers reject the whole wheat pasta, or did they simply not have any on hand on this particular day?
According to the student who chose this lunch, the beans were "the best part" of the meal. The pasta, he said, was cold. "I don't mean not hot," he elaborated. "I mean it's really cold." 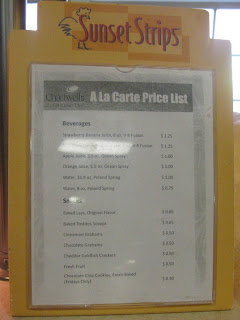 This was my first experience with an a la carte line in D.C. schools. I photographed the signage, but could not lose the glare from the overhead fluorescent lights. Still you can see what's being offered pretty clearly on this price list.
No sodas, "V-8 Fusion," juice, baked chips, crackers. There's nothing terrible for sale here--no ice cream bars, corn dogs or flaming Cheetos. Notice they do sell chocolate cookies, but only on Fridays.
I have no idea what "Sunset Strips" refers to. The signage is pretty weak. 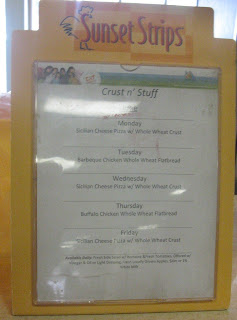 And here's a list of the "Crust n' Stuff" schedule for the week. How 1950s. Here's where you find pizza for sale three days a week, and a choice of two different chicken flat breads the other two days.
This is the same pizza and same flat bread served as entrees at my daughter's school. 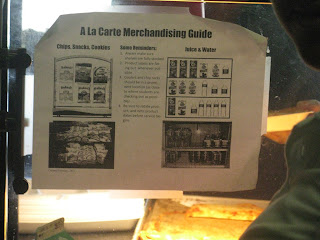 Finally, I don't understand why this "a la carte merchandising guide," explaining how the food items are to be displayed and stored, is taped to the sneeze guard for students to see. The curling edges just add to an atmosphere of cheapness and neglect.
Posted by Ed Bruske at 6:56 AM