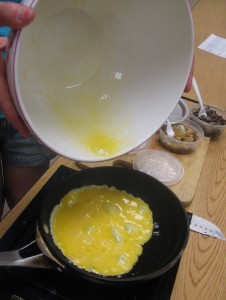 Omelets made on the cassette feu

This was our last week of food appreciation classes for the current school year. How tragic is that? It's also our final week in France on our virtual world culinary tour, so I picked something simple but classic to make with the kids: omelets.

I brought my cassette feu--or portable butane burner--to class so we could make the omelets at our usual work table, rather than at the stove, which is at the other end of the kitchen area. The work surface is also lower, which makes it easier for the kids to actually test their skill at making the omelets--meaning scraping around the edges of the eggs as they cook, tilting the pan to run the uncooked egg onto the surface of the pan, folding the omelet in half.

You don't want the pan too hot or the eggs will cook too quickly, brown too much, and possibly even burn. You also need to work fairly quickly so that you can add your filling--in our case sauteed onions and mushrooms--before the eggs are completely cooked. They should be still wet when you fold the omelet. The omelet will seal itself as it finishes cooking. I usually place a lid over the pan and lower the heat to assist in the process. 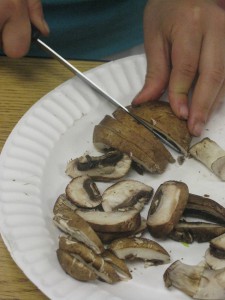 Preparing mushrooms for the saute

As always, the challenge is finding enough work for the kids to do. I had them slice cremini mushrooms and dice onions for the fillings. Half of a medium onion, cut into medium dice, plus a couple of handfuls of cremini mushrooms, thinly sliced, is enough for three omelets. We sauteed the onions and mushrooms together in some extra-virgin olive oil. Season with salt to draw out the liquid.

The kids also get to crack and whisk the eggs, one of their favorite kitchen tasks. They always leap at a chance to crack eggs. We added Roquefort cheese to our omelets, which works well with caramelized onions and presents an opportunity to talk about French cheese making and beneficial molds. After that, it's simply a matter of standing back and watching the kids gobble up the omelets.

This is one of those dishes that kids either love or hate. Some don't want the mushrooms. Others swoon over mushrooms. My own daughter won't eat eggs. But making omelets is one of her favorite kitchen activities. You just never know how kids are going to react to different foods. But I'd rank omelet making high on my list of essential kitchen skills.