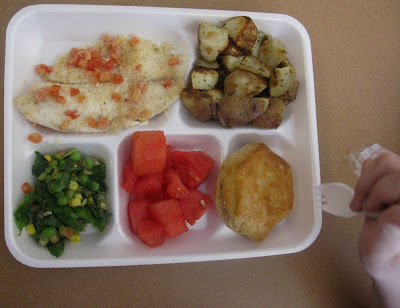 By Ed Bruske
aka The Slow Cook
D.C. schools lately have been serving tilapia on Thursdays on a fairly regular basis. You might think that's a great thing. Fish is a clean, lean source of protein and exposes children to something different from the usual routine of chicken nuggets and mac-n'-cheese.
But while fish looks great on the menu, it doesn't go over so well in the cafeteria--at least not at my daughter's elementary school in Northwest Washington. Yesterday I was careful to wait until most of the kids had eaten, then I took a slow walk around the lunch room. I saw only three kids who had actually eaten the tilapia. A couple others had poked at it. 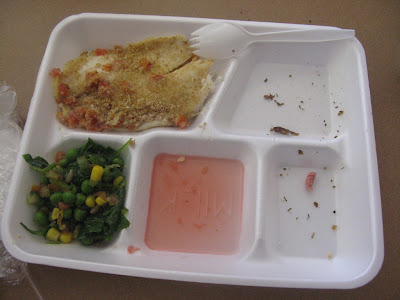 Most of the trays looked like this one. As you can see, the fish hasn't been touched at all. Nor was the featured vegetable side dish, the "crunchy spinach," as Chartwells calls it, a mix of frozen spinach, corn, peas and sunflower seeds. It's a clever combination of vegetables--whoever thought of it deserves a hat tip. But the kids don't eat it.
What did they eat from this meal? From what I saw, this tray was pretty typical. The kids dove into the roasted potatoes and the whole wheat biscuit. In other words, they gobbled up the starch.
Kids love potatoes, of course. It's their second favorite food after pizza. And now there's a controversy around spuds because the new meal guidelines the USDA has proposed would limit servings of potatoes and other starchy vegetables--corn, peas, lima beans--to just one cup per week in favor of more green and orange vegetables that kids are much less fond of.
They also loved the watermelon. And what's not to like about that? I tasted the watermelon and it was delicious. So much of the fruit served in school isn't nearly ripe, but this watermelon was. This was a real treat.
The lesson I draw from all this is that menu changes don't mean nearly as much as what actually takes place in the cafeteria. You can put "healthier" foods in front of kids every day and still they'll only eat what they want and throw the rest in the trash.
I shudder to think how much uneaten tilapia D.C. schools sent to the landfill yesterday.
Posted by Ed Bruske at 5:57 AM