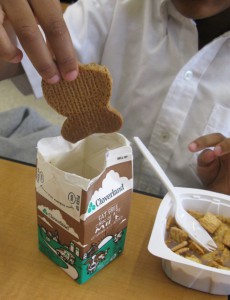 Some facts with that chocolate milk?

The National Dairy Council is circulating the testimony of a first-grader at Lafayette Elementary School who told the D.C. Council kids aren't drinking milk as much since chocolate milk was removed from the menu.

D.C. Council Chairman Kwame Brown last week grilled schools Chancellor Kaya Henderson on the subject during her confirmation hearings, trying to get Henderson to commit to reinstating chocolate milk in school cafeterias based on the 7-year-old boy's "research."

The boy's father, Chris Murphy, told Washington Post columnist Mike DeBonis that his son, Aidan Cohn Murphy, "is not a dairy lobbyist." But yesterday I was on the receiving end of a mass e-mail sent by Greg Miller, vice-president of science and research at the National Dairy Council, linking to Aidan's testimony with the words, "This kid did his homework."

Kwame Brown said he was impressed by the sleuthing Aidan had conducted, including a poll of 410 of his school mates to find that 58 percent are not drinking milk. (Apparently 42 percent are drinking plain milk, a lot more than are eating the green beans.) But a closer look shows that on several key points, Aidan got it wrong.

"We use to have chocolate milk in D.C. public schools," Aidan said in written testimony he submitted to the Council June 11. "But then you passed a law that said that no kids in D.C. Public Schools could buy chocolate milk. They could buy only white milk."

False. Apparently Chairman Brown thought Aidan was referring to the "Healthy Schools Act" the Council approved last year. But the act did not address flavored milk, nor does any other D.C. law. Removing flavored milk--which had included chocolate and even more sugary strawberry milk--was a decision made independently by school officials as part of an overhaul of school menus to make them healthier.

The chocolate milk from Cloverland Dairy the schools had been serving contained 14 grams of added sugar in the form of high-fructose corn syrup, or 3.5 teaspoons. “We’d like to teach students that sugar doesn’t need to be added to a natural food to make it ‘taste good,' " school food services spokeswoman Paula Reichel told the Post.

Aidan says that according to his survey, kids now substitute water for milk more than anything else. Many parents think that's a good idea. They don't believe milk is necessary. But Aidan went on to say that kids are substituting fruit juice for milk, and that would not be accurate. In D.C. elementary schools, children are required to take all of the offered food items at any meal. Milk is always offered. If juice is on the menu, they would be required to take that as well, not in place of milk. Juice typically is offered at breakfast, not so much at lunch. And at affluent schools like the one Aidan attends, breakfast participation traditionally is very low.

In proposed new meal guidelines, the USDA would make it more difficult for schools to substitute juice for whole fruit.

Aidan says Fairfax County also removed chocolate milk from the menu, but then brought it back with a "healthier kind of sugar." The truth is, sugar is sugar. There is no real difference between cane sugar and high-fructose corn syrup as far as your body is concerned, except that the corn syrup may contain a higher percentage of fructose. Both are equally bad. In fact, Robert Lustig, a specialist in pediatric obesity at the University of California, San Francisco, has called sugar "poison." The American Heart Association has linked it to risk factors for cardio-vascular disease in children. According to the heart association's guidelines, millions of children drink too much flavored milk.

Aidan said that as part of his research he interviewed a doctor who told him chocolate milk is "medium healthy" and "better than drinking soda." The policy of the American Academy of Pediatrics is that flavored milk served in schools can be a "healthful alternative" to sodas and other soft drinks. But D.C. schools have not allowed the sale of sodas or soft drinks since 2006. They are not available for sale in D.C. elementary schools, although some kids bring them from home.

According to this doctor, the calcium and protein in milk "are good--but the sugar is not good."

Aidan quotes a recent Washington Post article in which a USDA spokesman says the agency would rather have kids drink milk with added sugar than no milk at all. But there's something Aidan needs to know: the USDA's job is to promote dairy products. In fact, the USDA oversees the Milk Processors Education Program (MilkPEP), which collects money from dairies by congressional fiat in order to spend millions of dollars promoting the "Raise Your Hand for Chocolate Milk!" campaign.

The USDA designates milk as its own food group in the school meals program, and requires that it be offered at every meal. No other agricultural product receives such preferential treatment from the federal government. Still, sales of plain milk are only half what they were after World War II, while sales of flavored milk have tripled in since the 1970s. Chocolate milk is the dairy industry's way of competing with Coke and Pepsi. Big Dairy is desperate to keep kids drinking chocolate milk.

In other words, Aidan, there's very little difference between the dairy industry and the USDA when it comes to peddling chocolate milk to children.

Aidan, you should be listening to your doctor and your other schoolmates and just drink water if you don't like plain milk. Kids are not suffering a "calcium crisis," as the dairy industry would have you believe.

We know you and your friends love sugary chocolate milk. But you need to make the healthier choice and learn to like plain milk. What you should be lobbying the D.C. Council for is extra money the schools can use to install electric milk dispenser so kids can have fun pouring themselves glasses of cold, delicious white milk instead of the stuff they serve you in those miserable little cartons.