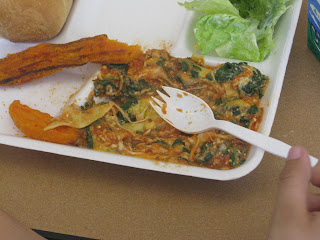 By Ed Bruske
aka The Slow Cook
As I've written before, our local lunch ladies here in the District of Columbia have been making lots more food from scratch this year as part of a major overhaul of the Chartwells menu that began last summer under the direction of then-new food services Director Jeffrey Mills.
One of the featured items has been a spinach lasagna made by layering sheets of pasta with frozen spinach, tomato sauce and mozzarella cheese in stainless hotel pans. Some days it's better than others, but overall a great addition to the menu. Except the kids don't care for the spinach. Many of them go to great lengths to pick through the pasta and cheese to remove the spinach.
The version served yesterday at my daughter's elementary school seemed to have less spinach and more cheese, making the pickin' more difficult than usual. Still, some kids were determined not to eat the spinach. In this photo you see how one scoop of lasagna has been mined for pasta and cheese, leaving the spinach behind. 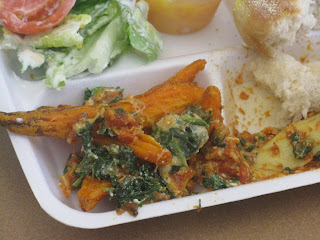 Another girl employed a different strategy, using her "spork" to pick out as much of the spinach as she was able, then dumping it on what appear to be strips of roasted sweet potato, which the kids didn't eat either.
The lesson, I think, is that you can make school food a whole lot better and still kids will only eat what immediately appeals to them and throw the rest in the trash. In fact, in my daughter's cafeteria at least, I'd say far more food gets tossed than actually eaten, including most of the vegetables, salads and rice side dishes.
While all of these positive changes to the menu and food preparation took place--including lots of fresh local vegetables and entrees cooked from scratch--there was no one in the cafeteria explaining to the kids what the new food items were.
So much work needs to be done coaching the children on what these unfamiliar foods are and why they should eat them. The quality of food in D.C. schools is astronomically better than the processed convenience foods that were served as recently as a year ago. Yet most of it is going to waste.
There should be adults in the cafeteria sitting with the kids, talking to them about the food, eating alongside them. In our school, teachers merely act as monitors, trying to maintain order. Sometimes I wonder why I am the only parent around at lunch.
Yesterday I got a bit of a shock from the cafeteria manager. She normally gives me a tray of food to photograph, but yesterday she would barely make eye contact and informed me that the only way I would get food was if my daughter, who had brought lunch from home, stood in line and paid for it.
I think the cafeteria manager may be angry about the post I wrote recently on the barbecued chicken. She brought it up with me the other morning, sounding upset that I would criticize the way the chicken was cooked.
What I had tried to convey in that piece was how badly mistaken my daughter was about the palatability of the chicken. She says she doesn't like it because it's either overcooked or covered with too much sauce. I meant to say how far off base she was: the chicken is really good. But I kind of mangled it.
I've since gone back and performed a little re-write to make that more clear.
Posted by Ed Bruske at 6:47 AM