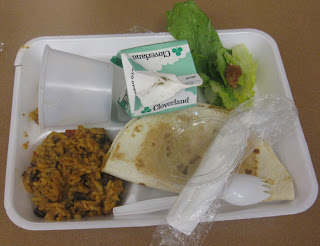 By Ed Bruske
aka The Slow Cook
Believe it or not, many kids go through the lunch line at school and then barely touch the food. It just gets tossed in the trash. I'm not sure how the children make it through the day, but so many of them just nibble.
This is what one boy's tray looked like near the end of lunch hour. He didn't even take a bite out of the cheese quesadilla--nor the beans and rice, nor the salad. The only thing he ate was a little cup of apple sauce. But look! He drank his milk! Who says kids won't drink plain milk?
This tells me that kids are served way more food than they actually need. They typically ignore vegetables and anything else that looks suspicious--like brown rice mixed with beans and tomato sauce. 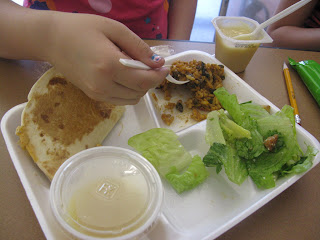 To make sure my eyes weren't deceiving me, I took a slow walk around the lunchroom and observed closely what the kids were doing with their rice and their salad. I counted exactly six kids eating the rice. Two of them were Hispanic, one Asian. My daughter, the carbohydrate hound, wolfed hers down and went back for seconds (she was denied).
Fewer still ate the salad. I don't understand that. It's Romaine lettuce with croutons, not that stale, commercial mix of iceberg and shredded carrots and cabbage the schools used to serve. All that salad, along with the rice and beans, simply gets dumped in the garbage.
The kids were a bit more enthusiastic about the cheese quesadillas. In fact, I'd say Mexican food is a pretty safe bet in school cafeterias.
Posted by Ed Bruske at 7:17 AM