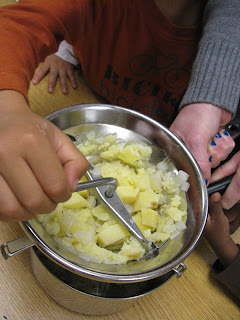 The simplest soup is also the best.

Our food appreciation classes this week left Africa and landed in Portugal where we set to work making a classic potato and kale soup called caldo verde. Kids love this soup, so add it to your list of recipes that encourage kids to eat vegetables, in this case very healthy and seasonal kale.

In Portugal, market vendors use a machine to chop the kale into a very fine julienne. Otherwise, this soup is incredibly simple with just five ingredients: potatoes, onion, kale, water and salt. A slice of fried linguica sausage is recommended to garnish the soup. We used kielbasa.

To make the soup, peal five medium-sized boiling potatoes such as Yukon Gold and cut into 1-inch pieces. Finely chop 1 onion. Place the potatoes and onion in a heavy pot with six cups of water and bring to a boil. Reduce heat and cook until potatoes are tender.

Meanwhile, trim the stems and tough ribs from 8 ounces of fresh kale, then slice the leaves into fine julienne about two inches long.

When the potatoes are done, there are two ways you can proceed. The original recipe we used called for pureeing the contents of the soup pot, then adding it back to the pot along with the julienned kale and cooking about five minutes until the kale is tender. Since we do not use electric gadgets in our classes, we strained the potatoes and onion from the pot and ran them through a food mill. We cooked the kale in the potato cooking water, then stirred the potato mixture back into the pot. Yet another alternative is to use an electric food processor instead of the food mill, which will result in an even creamier soup.

Season the soup with salt to taste and distribute into warm bowls. Add a 1/4-inch slice of fried sausage to each bowl for garnish. Kids will ask for seconds on the sausage, but we only give it to them when they've finished the soup--including the kale.