Not Your Momma's Lunch Ladies 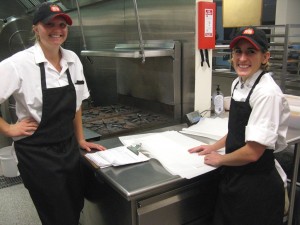 I was happily stuffing cheese quesadillas at Boulder's Monarch High School one morning when a perky young woman in a crisp white shirt, natty black apron and spiffy billed cap extended a paper container filled with freshly mashed potatoes in my direction.

In fact, they did need a little salt...But wait! Who was this person, and what was she doing in a school kitchen? Weren't "lunch ladies" supposed to be old and gnarly and wear hair nets?

Turns out her name is Margaret Hancock, a recent graduate of the elite Culinary Institute of America, and she'd spent a good part of the last two years pestering Ann Cooper for a job cooking in the Boulder schools.

"I've been trying to get my foot in the door since the program began," Hancock said.

Nearby was Hancock's co-worker, Ali Metzger. She, too, was a CIA graduate. "I was joking that if people at the CIA knew Ann Cooper was advertising jobs on Craig's List, they'd be all over it," Metzger quipped.

News flash, Ali: They already are all over it. There are two CIA externs waiting to move to Boulder as we speak.

As I discovered during my week in Boulder school kitchens, Cooper not only is remaking the food service in area schools, ditching junk food for meals cooked fresh, she's also created a parallel culinary universe where newly trained chefs forgo a glamorous career in fancy restaurants in order to mash potatoes for teenagers.

"When I first applied, Ann said I was too young," said Hancock, who sports degrees in business and culinary arts. So Hancock went off to run a bagel shop in Denver, but kept calling and calling until Cooper gave in. "It's a way for me to do something meaningful. This is the first job I've ever had where I walk out the door at the end of the day and no matter how many hours I work, I feel good about it."

Even the sous chef who runs the kitchen at Monarch High has caught the fever. Yuri Sanow, a professional chef of many years experience, was working at the Black Hawk Casino when he saw an ad Cooper posted on Craig's List. He gave up a hefty annual bonus to pull up stakes and come work in Boulder.

"All I was doing was making millions of dollars for a big corporation," said Sanow. "Here, I feel like I'm making a difference." 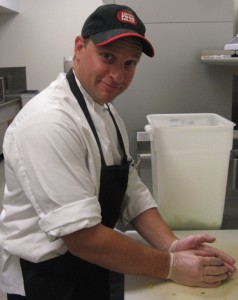 Before you imagine a trend sweeping the school food landscape, know this: These people have no interest in slinging corn dogs and tater tots. They're only here because Cooper, in her makeover of Boulder's school menu, determined that what the schools needed desperately was a handful of production kitchens manned by trained chefs to make meals for the entire district. The chef's jackets, aprons and monogrammed caps reading "School Food Project" are all intended to project a sense of order, competency and professionalism. In Boulder, lunch ladies never had a uniform before.

Sarah, who asked not to be identified by her last name, was a sous chef at an upscale Boulder restaurant who wound up in a school kitchen as a parent volunteer. But she was soon ready to quit after she saw the stuff the schools were serving as food. "They said, 'Hang in there. Ann Cooper's coming.' And they gave me a copy of her book." Sarah now directs the meal service at Casey Middle School.

Prior to Cooper's arrival, food was being prepared by those very same lunch ladies in 22 of Boulder's 48 schools. Eleven kitchens made food for multiple schools. Eleven prepared meals only for individual schools. The cooks involved were minimally skilled. They received virtually no training or oversight. Cooper cringes to think of all the waste and inefficiency involved. In her ideal world, she would consolidate all of the district's cooking into one central facility where everything could be managed to a fare-thee-well.

A central kitchen that size, she said, would probably cost $10 million and require voters to approve a bond measure. And that is precisely her objective.

Now in her second year of the makeover, Cooper has reduced the number of production kitchens to five and hired a busload of eager chefs--some young and starry-eyed, like Hancock and Metzger, others older and more experienced, like Sanow--to prepare the food. Henceforth, the lunch ladies would only re-heat and serve it.

Why didn't Cooper just train the lunch ladies to do the job? "We have our hands full just making sure they re-heat the food properly and don't cook it to death," explained Cooper. "They just don't have the skill sets for the level of food preparation that's required. Thirty-five to 40 percent of them didn't know how to use e-mail. Forty percent don't know how to open a document on the computer. You need professionals in some capacity if you're going to change a system of this size."

The great kitchen re-alignment started with a simple formula: 20 meals for every hour worked. That's the production level Cooper would aim for and it spelled bad news for the lunch ladies. In order to accommodate the new production teams--five district managers, each managing eight or nine schools, five sous chefs, and assistants such as Metzger and Hancock for each sous chef--hours would have to be cut elsewhere.

According to one published report, some of the kitchen staff now complain that they have to work hours off the clock to complete their assignments.

To get everyone on the same page, Cooper in the first year of the program--fall 2009--spent some $200,000 in privately donated funds for a week's worth of training for the entire kitchen staff. That meant more than 150 employees took the ServSafe course in food sanitation. Two long-time collaborators of Cooper flew in from California to teach basic kitchen skills: how to re-heat and serve food, how to use a thermometer, how to use knives, how to set up and break down salad bars, how to manage a cash register. There were team-building exercises with a local coach. Cooper and her business partner, Beth Collins, also gave instruction.

This year, in August, Cooper spent another $75,000 training her new production crew, giving basic training in how the Boulder system works, familiarizing them with recipes, how to pack and ship food. A software representative came in to explain a new system for integrating recipes, productions schedules and inventory.

"If you’re going to make these changes sustainable and systemic you have to fund training," Cooper said. "You have to train your people and give them the tools to succeed." 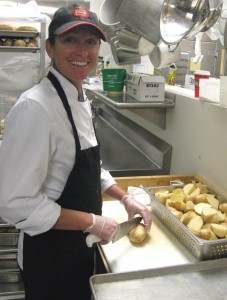 One of the five new district managers is Brandy Dreibelbis, who gave up a job as executive chef for Whole Foods in Boulder to lock arms with Cooper.

Originally from Delaware with a degree in hotel and restaurant management, Dreibelbis had spent years working a frantic pace in restaurants when she took a flyer and applied for a job with Whole Foods. She landed in Boulder, and within six months had the top kitchen job. She liked the new lifestyle, too: formerly a beach girl, she climbs mountains, skis, hikes in winter on snow shoes. But after two years as executive chef, she found few options to advance and continue cooking. Meanwhile, she'd seen numerous reports about changes happening in Boulder's cafeterias. Whole Foods was raising money for the project.

"I went in for an interview and left feeling a little unsure about venturing into something so different food-wise than what I had known, and I wasn't sure if I was really ready to leave Whole Foods," Dreibelbis said. "I came back to work from a day off and all of a sudden I was surrounded by posters and advertisements for healthy school lunches and pictures of Ann at work. I thought this was probably a sign."

“I took this job because I wanted to be a part of something that is truly important and I wanted to make a difference,” Dreibelbis said. “I wanted to get in on this project and have a part in a model that any district could pick up and learn from.”

Not only did Dreibelbis take the job, she started poaching talent from among her former underlings at Whole Foods. That would include Ali Metzger and Margaret Hancock's twin sister, Michelle, who works as a production cook at Casey Middle School. She took a pay cut to leave Whole Foods.

"I never had a job before where I was giving back," Michelle Hancock explains. "It's rewarding to see the kids eating the food and raving about it. One day I bumped into a mom in the parking lot and she talked to me for half an hour about how much she loves what we're doing and now she wants to get involved, too."

Hancock's supervisor, Sous Chef Phil Stinar, a onetime Army cook, was recruited by an old colleague in the restaurant business who also had signed on with Cooper as a district manager. With 25 years of corporate kitchen work under his belt, Stinar has been around: regional manager for Applebee's, eight years at Cheesecake Factory, a stint at Rock Bottom Brewery. He likes the mellower pace of a school chef. 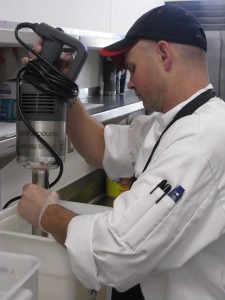 Phil Stinar: Not a lunch lady

"I love this work," he said. "The pace is set by me. We produce a really good product. Some of my friends in the business have asked me, 'Why do you want to be a lunch lady?' I tell them I'm not a lunch lady. I run a production kitchen."

Next: The new food in Boulder schools. It's not quite cooked from scratch...yet.