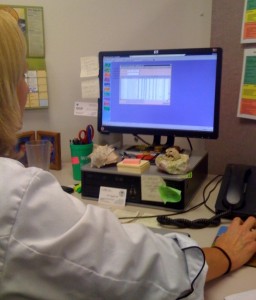 When she arrived in Boulder in May 2008 to investigate food service in the schools, Beth Collins found that the cooks had to send paper purchase orders to the school system's central warehouse to get the ingredients they needed to cook meals. The nutrition services department and the warehouse had computer systems, but they didn't talk to each other. A nutritionist who wrote menus for the schools entered them by hand on an Excel spreadsheet.

For Collins, who eventually would be tasked with turning Boulder's neglected food service infrastructure into a smooth-running machine, what she first saw there was like stepping into another era. But that's hardly unusual for U.S. schools and especially school food operations. They are at the end of the line when it comes to adopting modern technology. And that helps account for why they have trouble making ends meet under the federally-funded school meals program.

The U.S. Department of Agriculture requires all school districts to maintain meticulous records of all the purchases they make as a way of proving that they have actually made the meals for which they claim federal reimbursements. Collins said she was in a school district in Misssissippi recently where they kept something they called "The Red Book," meaning a ledger in which they recorded all of their purchases with pen and ink.

Boulder schools had installed a food service computer software program called VBOSS but were hardly using it to its full potential, Collins said. In quick order, she began to integrate various meal service functions into the software system, everything from writing menus and processing procurement, to sending work instructions to production kitchens, managing warehouse purchases, keeping inventory and archiving those records required by the USDA. Laborious paper submissions to the federal government turned into streamlined electronic ones.

Computers manage the cafeteria hardware that allows students to pay for their meals using a touchpad instead of cash, identifies and records those who qualify for free and reduced-price meals and keeps a record of everything they purchase. It allows parents to pay for meals with a credit card online. VBOSS can take simple menus and "explode" them into recipes that will feed thousands of children.

"The best thing it does is take orders from 48 school kitchen sites and consolidate those into something the central office can work with," Collins said. "They're big time savers. Otherwise, you'd be shoveling e-mails and paperwork all day. And there's accountability across the board."

Still, Collins said the VBOSS system, for which the Boulder school district pays a $17,000 annual licensing fee, "is something of an antique." But the new and improved version, called OneSource, from Horizon Software in Duluth, Ga., is something the district simply can't afford, she said.

Amy Huff, vice-president of marketing for Horizon, said the upgrade to OneSource is free to existing customers, but often requires an expensive change in computer hardware. The latest features include food safety monitoring that records the temperatures in refrigerators and freezers and will send electronic alerts if a mechanical failure sends temperatures into dangerous territory. An even newer innovation places digital signage in cafeteria lunch lines and gives students nutritional information on the food being served.

The OneSource system can cost less than $2,000 for a single private school, or more than $1 million in the case of Los Angeles, Horizon's biggest customer with some 900 schools. The costs for other large school districts runs in the hundreds of thousands of dollars, Huff said.

Horizon counts 720 school districts encompassing some 12,000 individual schools as clients nationwide. Huff said Boulder is in the vanguard of those embracing modern softerware capabilities to improve their food service operations. Most are not even close to being up to speed with current technology. "School districts are slow anyway, and they're even slower in the back of the house behind food services," Huff said.

Ann Cooper, with her insistence on professional management and maximum use of technology, stands out among food service directors, Huff said. "Most schools hire from within. The food services director is a longtime employee, maybe from another department. They don't have nearly the background that Ann Cooper does. She's not at all typical."

In August, Cooper paid to have a Horizon representative teach her new kitchen production crew how to use the system.

"As school food transitions from processed food to scratch cooking whole foods, we need to harness technology to help us control our costs," Cooper said. "From menus and recipes to purchasing and inventoring and from email to spreadsheets, we need to become as efficient as possible. Computer systems are part of the support sytem that will make success a reality."