After putting four children through Boulder schools, Sylvia Tawse was tired of talking about changing the district's lousy food. She wanted to do something about it.

"I had been packing lunches for my kids for 17 years. Once a month, I'd go have a lunch with one of the kids," Tawse said. "The food wasn't just highly processed, it wasn't pleasurable food. For me, sitting around the table and having a nice experience is important."

A successful public relations entrepreneur, caterer and owner of a vegetable and flower farm, Tawse for years had been involved in school issues. A task force she had helped form with other parents had turned it's attention to Boulder's school cafeterias. But it was going nowhere.

"It seemed like we just met and met and nothing ever got done."

So when Tawse heard Ann Cooper, the "renegade lunch lady," speak at a culinary convention in Chicago three years ago, she seized her chance. She introduced herself and made a proposition: Since it was Cinqo de Mayo, would Cooper join Tawse for tacos at the home of Tawse's sister, who lived nearby, and talk about school food in Boulder?

"Normally I would say no to that kind of thing," said Cooper. "I'm an introvert anyway, and hanging out like that with people after giving a big speech is the last thing I want to do."

But she did. "I don't know why I agreed. I just connected with Sylvia." And courtesy of Tawse, Cooper was soon on a plane to give a pep talk to some 35 of Boulder's local school boosters--parents, bankers, lawyers, restaurant owners, school administrators--over coffee at Tawse's office and sign copies of her latest book. At the time, she was still busy in Berkeley, where she had spent three gruelling years redesigning the school district's food service from re-heated frozen processed meals to cooking from scratch, an undertaking she describes as "the hardest thing I ever did." The last thing on her mind was taking on an even bigger school district like the one in Boulder.

At one point, Cooper was offered the job of nutrition services director for the Boulder district. She said, No thanks.

"I’m going to be 57 years old and this is hard," said Cooper. "I kind of thought I could be doing other things at this point. I could work on a national level. But after I got here and met the people and started getting involved in the community it was, like, wow, maybe it makes sense." 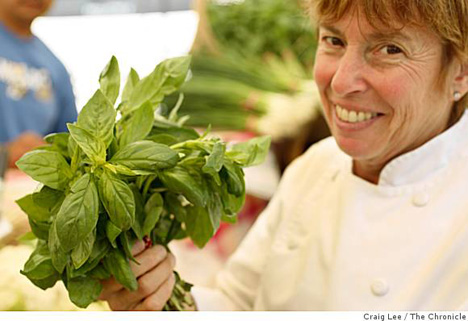 Her business partner, Beth Collins. sealed the deal. "Beth said, 'You'll learn so much from this. And nobody will be able to say the Berkeley model isn't replicable if you do 50 schools.' "

Meanwhile, then-school board President Helayne Jones was lobbying colleagues and the schools superintendent to hire Cooper to conduct a feasibility study for overhauling the district's food service.

Years earlier, Jones had made improving Boulder's cafeterias a personal mission after a gym teacher tried to involve her son in a fundraiser selling Ding Dongs and sodas. "My son had never had that kind of food before," Jones said. For subsequent fundraisers, she managed to substitute granola bars and juice. But she would not let her kids eat the food at school. "It was all chicken nuggets and nachos with Velveeta cheese," she said.

"I’m not militant about food at home, but my kids were raised eating very limited amounts of processed food and no sugar," Jones said. "I really felt for the teachers after lunch, the kids eating all this junk and the behavior the teachers had to deal with. I really believe it matters what kind of food you put in your body."

She said she had tried to work with Boulder's longtime food service director, to no avail. When she ran for a spot on the school board, Jones put improving cafeteria food at the center of her campaign. By the time Cooper rolled into Boulder, Jones had already heard her speak on the need to pay more attention to what kids were eating at school. Like so many others, she was inspired. "She was saying all the right things and she wasn’t just complaining about problems, she was doing something to work on solutions."

The school board easily awarded Cooper a $100,000 contract. Together with Collins, Cooper formed a company--Lunch Lessons--to investigate food service in Boulder schools and prepare a report on how the district might go about making meals there more like Berkeley's.

Tawse was ecstatic. "It was like we finally got a person we can invest in," she said. Eventually she would help raise thousands of dollars and deploy her public relations firm to help spread the word in the community. That was the beginning of a community fund-raising effort that so far has contributed hundreds of thousands of dollars to the cafeteria improvement initiative Cooper started, called the School Food Project.

In May 2008, a team consisting of Collins and two other culinary professionals from California arrived and set up shop in the Boulder Outlook Hotel. Armed with global positioning devices and a list of Boulder's schools, they spent the next two weeks conducting an inventory of the entire food service infrastructure. It would be the first of three visits in which the evaluation team would find Boulder's food services division largely in disarray.

The cafeterias in Boulder's secondary schools looked more like 7-Elevens, with 30 or more different "a la carte" items for sale in addition to hot meals made from frozen components. Among beverages, kids could choose from Arizona drinks and Gatorade, Hawaiian Punch, hot chocolate, Nestea, orange juice, assorted bottled waters and milk in a variety of flavors. There were Cheese Nips, potato chips, popcorn and pretzels soft and hard. For entrees, there were burritos, Subway sandwiches, "wok and rolls," pizza and cup-of-soup. They could snack on beef jerky, fruit leather, candy, granola bars, Hostess cakes and pies and Rice Krispy treats. There was even more variety on the sweet side: Otis Spunkmeyer cinnamon rolls, cookies and brownies; Fig Newtons, Chips Ahoy and Tiger Bars. They could finish it all off with any number of different ice cream treats: Dole fruit and juice bars, fudgesickles, Eskimo Pie, ice cream sandwich, Nestle Crunch or Snickers Bar.

Many schools sell faux-foods like these on the theory that they make more money than regular meals and help keep the perpetually underfunded food service program afloat. But Beth Collins and her team found that not to be the case. Many students were spending $5 or more on a la carte items, compared to $3 for a hot high school meal. But the food cost as a percentage of sales for snacks worked out to 64 percent, compared to 38 percent for full-fledged meals. Plus, kitchen staff spent more time than they could afford trying to keep track of their inventory and finding places to store it all. "From a staffing standpoint, some sites seemed overwhelmed with managing that many choices," Collins would report.

The "lunch ladies" in individual schools typically received no training and management of them was lax. One kitchen had not seen a visit from superiors in the nutrition services department for three years. In fact, there was no budget for professional development. "Their labor was pretty much out of control. You'd go into a school and they'd be serving eight different entrees because they felt like it," Collins said. "We knew it wasn't being run efficiently because they were running a deficit every year."

"Decisions were made on what you could sell the most of and not necessarily what was best for kids," said Jones. "It’s sobering to realize that what was happening in Boulder is the same thing that happens in every jurisdiction in this country." 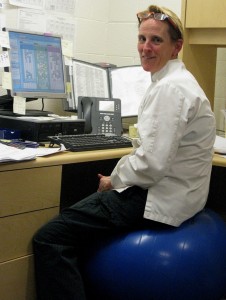 Sanitation and food handling practices also fell short. "They'd cook off a chicken patty and if it didn't sell, they'd serve it the next day," Collins said. "Hot" meals served next to a la carte selections often were pre-plated and just sat on the counter getting cold.

Although the schools cooked very little actual food other than frozen items that were served re-heated, the kitchens were equipped as if they did. In fact, Boulder schools were loaded with equipment--ovens, stoves, mixers. "There are enough Hobart blenders in this district to whip meringue from here to the East Coast," Collins remarked. But with only one year-round employee in the entire department--the food services director--there wasn't much oversight of new kitchen construction either. Even the most recent projects called for fully equipped kitchens as if food were being made from scratch.

Problems extended into food purchasing and the school district's warehouse. Schools are entitled to a certain quantity of government commodity products such as meat and cheese depending on how many meals they serve in the federally-subsidized program. But in Boulder, no one seemed to be keeping track of those entitlements. For instance, commodity cheese was diverted to a manufacturer-- Bruno's Pizza--to make ready-to-serve pizzas for the schools. But "no one really knew how many pizzas had been sold," Collins reported, or "how much cheese was used per pizza and how much commodity cheese was still in Bruno's hands from the last year."

There were no inventory controls. Food products purchased by the schools languished sometimes for years unused in the district's central warehouse. There were pallets stacked with canned processed cheese and green beans, some of which had long since seen their use-by dates expire. The warehouse presented its own issues. The food services division was stymied by purchase order requirements and backlogs of paperwork. Warehouse and food service worked on separate computer programs that did not communicate.

"If you want to serve real food, you have to be efficient and systematized," Collins said.

In the fall of 2008, Cooper went before the Boulder School Board to present her team's findings. "I told Ann she should bring a No. 10 can of that processed cheese from the warehouse," said Sylvia Tawse, the parent activist who originally had gotten Cooper involved with the project.

The school board told Cooper, You're hired.

"She was the person best equipped in the United States to do this work," said Jones, who continues to serve on the school board. "I think it's the best decision we ever made."

Next: Boulder's new chefs are not your momma's kitchen ladies.