Not Quite Cooked from Scratch...Yet 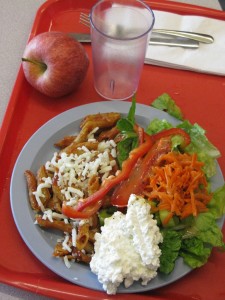 Ann Cooper warned me that I might see some unusual things in the school kitchens on my visit to Boulder. I did.

One morning at Casey Middle School, five-pound bags of what looked like frozen cookie dough lay on a stainless work table. In fact, labels described the contents as chicken gravy. Not your typical institutional gravy, processed in some distant factory with 50 industrial additives, however. No, this chicken gravy—destined to make hundreds of portions of chicken pot pie for Boulder school children--came from a family-owned company less than an hour away in Denver and was made according to Ann Cooper’s precise instructions.

Ready Foods, established in 1972 with Mexican cuisine in mind, now specializes in custom-formulated “kettle” products for restaurant chains, meaning just about anything that can be cooked in a 200-gallon commercial kettle. Chinese, Italian, Mexican—Ready Foods covers it all, says owner Marco Abarca. Yet until Ann Cooper came along, he had never considered schools as a potential customer.

“I always thought school business was something I would never go after because it’s so heavily bureacratic,” Abarca said. “It seems to be all about low quality, low price. And that’s not something I want to be in.”

But for Cooper, who is all about cooking school food from whole ingredients without the additives, Ready Foods was a perfect fit. She could tell Abarca exactly what she wanted in her chicken gravy--known as veloute in chef circles--meaning none of those emulsifiers, stabilizers, flavor-enhancers and preservatives whose names you can't pronounce. After visiting the factory with her business partner, Beth Collins, Cooper now sends Abarca the government commodity beef she earns selling meals in the national school lunch program to turn into chili and taco filling. In his 85,000-square-foot food factory, Abarca makes the béchamel sauce for Boulder schools’ macaroni and cheese.

What’s happening in Boulder offers a rare glimpse into the carefully choreographed steps that must be taken to accomplish radical change in a large school district's food service. Cooper has unveiled an all-new menu and hired a new staff of professional chefs and kitchen managers to cook meals in five newly outfitted production kitchens. While the cooks get their legs in the new digs, Cooper devises ways to remain true to her belief in unadulterated food.

It's a work in progress, and the details are almost unfathomably complex. 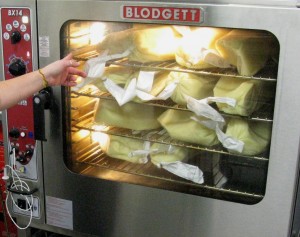 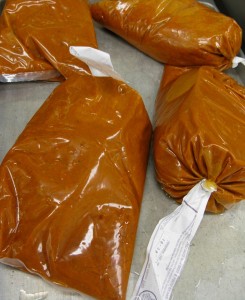 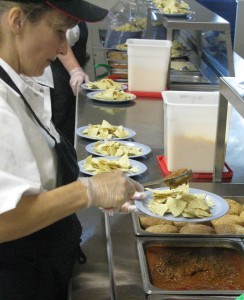 Cooper writes her school menu for the entire year months in advance. The commodity food products she uses--beef, chicken, pasta, cheese, beans--must be ordered from the federal government a year ahead of time. To coordinate ingredients, menus and production details, Cooper and Collins create a giant Excel spreadsheet listing menu items and recipes Collins has devised that can "explode" from a basic formula into servings for thousands of kids.

They then examine each day's menu and calculate how the meals will be assembled, the staffing needs, the equipment required. For instance, a roast chicken thigh on the menu means the production kitchens will need sheet pans on which to cook the thighs and ship them to outlying schools. How many thighs fit on a sheet pan? How many sheet pans are needed? How many sheet pans fit on the rolling racks the kitchens use to transport the roasted thighs? And how many rolling racks will fit on one of Cooper's delivery trucks?

All of that might affect the next day's menu selection as well: there could be a problem if sheet pans were needed again and they had not been returned from the schools to the production kitchens.

"Sometimes a menu choice might change depending upon what equipment is needed and whether you have the refrigerator space and the capacity to ship it," said Cooper. "And where are we going to store all the sheet pans when we aren’t using them?"

Cooper continued: "There’s a lot of complexity to it because it’s not just about how to cook the chicken. Without some kind of owners manual, it’s really hard to figure out how to do it. Unless you have a very strong background, it’s very hard to get your arms around all these pieces."

One of Cooper's district managers, Brandy Dreibelbis, scans the menus and the recipes and writes the "prep lists"--the work that needs to be done on any given day--for an entire month and for all five of the system's production kitchens. Cooper wants to know that all of her production cooks are doing the same thing on any given day. Anything she can do streamline and economize potentially saves money that can be used to improve the quality of the meals she serves. It also takes pressure off her employees, who are still getting used to the new system in Boulder.

In Berkeley, where Cooper also revamped the school meal service, the central kitchen makes something I call “epic chicken,” meaning the 1,400 pounds of chicken parts that arrive courtesy of the federal government frozen in 40-pound blocks. They require days--and quite a bit of room in the central kitchen facility--to defrost, marinate, sort, roast, package and ship to the district's schools.

To eliminate some of the hassle, Cooper in Boulder buys commercially prepared chicken thighs that are quick-frozen individually so they can easily be poured out of a bag and placed on a roasting pan, a method she wishes the U.S. Department of Agriculture would adopt.

Those chicken thighs taste awfully good next to a side of freshly mashed potatoes. I was also taken with a barbecued chicken sandwich made with diced chicken that arrives cooked and frozen from Gold Kist Farms. In fact, frozen foods show up in some surprising places. The frozen corn on the salad bar is nothing new, nor are the frozen peas. But would you believe frozen hard-boiled eggs to spoon over your salad? If one of the cooks hadn't told me, I would never have known.

Cooper puts out 10,000 meals a day--2,500 breakfasts and 7,500 lunches--and despite the difficulties of implementing so many changes in a relatively short period of time, and the many products she's out-sourced rather than cooking from scratch, she's managed to keep ingredient costs to $1.13 per meal, not terribly higher than the national average of around $1.

"That's a testament to Beth’s ability at procurement, but also testament to our ability to manage waste and product," Cooper said. "It’s a big, big job. People say, 'God, you have so many managers!' But you have to have managers to manage all your costs. We’re spending a couple million dollars on food, so we have to manage it correctly." 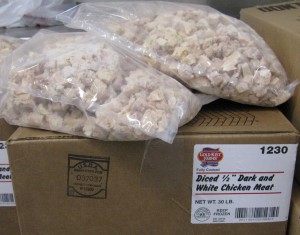 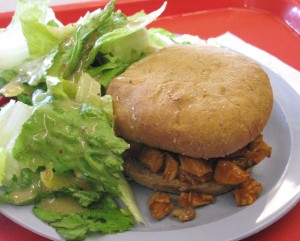 Turns into a yummy barbecue sandwich

Kids, meanwhile, don't care about management, and they may still need some convincing where healthier foods are concerned. They're nostalgic for the good old days of processed convenience foods. They miss their chicken nuggets and Subway sandwiches and even the miniature pancakes that were served re-heated inside their plastic packaging. A Boulder lunch menu from April 2005 lists macaroni and cheese, hamburgers, hot dogs, mini-pancakes with sausage and the ever-popular pizza. There were chicken nuggets, nachos, a beef rib sandwich, cheese sticks and a soft pretzel with cheese sauce. They still talk about the "French toast sicks" that were served as a lunch item.

"On Friday I saw 10 kids with microwavable meals in the cafeteria," said Michelle Hancock, a production cook at Casey Middle School. And since the schools serve only plain, low-fat organic milk from dispensers under Cooper--no more cartons of chocolate or strawberry--some kids bring their own chocolate syrup from home to squeeze into the milk, Hancock said.

Cooper's menu contains many kid-friendly items that sound very similar to those on the old menu. But they've all been redesigned to be healthier. Hamburgers, for instance, are served on a whole wheat bun. Pizzas are made in-house using a frozen, commercial crust with fresh-made sauce. Nachos are made with grated real cheese, not the canned, DayGlo stuff full of industrial additives. Some kids have complained the new food doesn't have enough flavor. Coopers chefs continually tweak the recipes.

"Last year we cheated," said Margaret Trevarton, the head "lunch lady"--or "kitchen satellite lead"--at Columbine Elementary School. "I was adding spices to the food, like garlic in the macaroni and cheese." 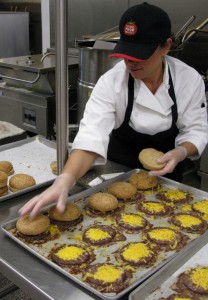 One morning my assignment was to help stuff 800 cheese quesadillas at Monarch High School. They couldn't have been simpler. Whole-wheat flour tortillas were laid out on a metal surface. A filling of grated cheddar cheese mixed with tomato salsa had already been mixed in a huge plastic tub, or Lexan. A cook laid a firm scoop of filling on each tortilla and I followed, spreading the cheese over half the tortilla with my fingers, folding the tortilla in half to cover the cheese. It was pleasant, meditative work. No one was having a heart attack--no barking in this kitchen.

For November, the Boulder menu called for nachos, pizza, chicken pot pie, pasta Bolognese, roast chicken, tacos, hots dogs and a shepherd's pie that so far has failed to light a spark in the student population. As the staff settles in, Cooper plans to cook more of the food from scratch. And as cold weather approaches, something new will appear in Boulder's cafeterias: hot soup. 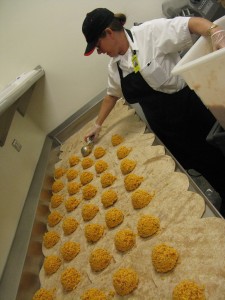 Cooper needs an additional 1,000 kids, approximately, to eat the meals district-wide to balance a $360,000 deficit in her food service operation. About 5,000 of the kids who regularly participate in the meal program eat free or at a reduced price based on family income. That means Cooper so far is reaching only 15 percent of kids who can afford to buy their own lunch. Here's the good news: Cooper still has 85 percent of the full-price student population from which to draw the customers she needs. So far this year, Cooper says she's on target.

Next: Why Ann Cooper believes every school cafeteria should have a salad bar.