The Many Faces of Ann Cooper 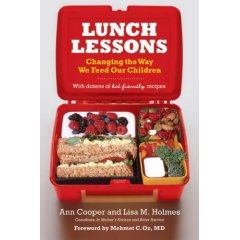 Ann Cooper is involved in so may different activities and is branded in so many different ways it's sometimes hard to know where one starts and another ends without a program. Here's an organizational chart of sorts to explain the multi-faceted world of one very busy school food reformer.

Long before she started serving school food, Cooper was already an accomplished chef and author. A 1979 graduate of the Culinary Institute of America, Cooper cooked in restaurants, on cruise ships and as a caterer in a mountain resort. Her first book, A Woman's Place is in the Kitchen: The Evolution of Women Chefs, was published in 1997. While executive chef at the Putney Inn in Putney, Vt., Cooper published an overview of contemporary food issues titled, Bitter Harvest: A Chef's Perspective on the Hidden Dangers in the Food We Eat and What You Can Do About It.

Cooper's introduction to school food occurred at the private Ross School in East Hampton, New York, when she was recruited by restaurateur and sustainable food advocate Alice Waters to undertake a major overhaul of cafeteria operations in Berkeley, Calif. Beth Collins, a chef and school food consultant from Traverse City, Mich., also worked at Ross School and succeeded Cooper as executive chef there briefly, but soon left to join Cooper in Berkeley. When Cooper and Collins were asked to perform a feasibility study for re-desigining food service in Boulder, they formed a company called Lunch Lessons--the same name as the title of Cooper's latest book--to consult on and implement the project.

Lunch Lessons was paid around $100,000 by the Boulder Valley School District to perform the feasibility study. The company is now working on its third annual contract with the district--$28,000 per month last year, $18,000 per month this year--and Cooper shares in the profits, in addition to the $89,000 salary she draws from the BVSD. The Lunch Lessons website is where Cooper posts her bio and contact information, along with school recipes developed by Collins and a "tool kit" designed to help others improve the food in their schools.

In school food circles, Cooper is treated like a rock star. She travels widely giving talks on the subject. She is constantly in demand by the mainstream media for opinions on school food issues--and she has no problem giving them. As nutrition services director for Boulderr schools, Cooper maintains an office near the buttoned-down front of school district headquarters just outside of town with a stunning view of the mountains. One secret to her success seems to be, Don't waste time sleeping.

Collins, meanwhile, plays the silent, but potent, partner who stays mostly in the background, getting things done. "I'm the heavy lifter person and it works out very well," Collins said.

She works out of a separate office near the maintenance operations at the rear of the school district facility. There, you are apt to bump into burly men in Carhartt overalls in the hallways. The stillness of the computer lab is sometimes interrupted by the sound of power tools interacting with large metal objects.

Cooper said Lunch Lessons gradually is winding down its work in Boulder as it builds a revamped and beefed up nutrition services organization. Collins' work, she said, will probably be finished by spring.

While working in Boulder, Cooper also formed a partnership with Whole Foods that led to an ongoing effort to raise funds to install salad bars in schools nationwide. To oversee that project, Cooper established a non-profit group called F3: Food, Family, Farming Foundation. Collins serves as executive director, while the day-to-day operations are handled by Barbara Ann McMonigal, a Culinary Institute of America graduate and former line cook at The Green Zebra restaurant in Chicago. McMonigal also manages the foundation's website--The Lunchbox--which looks very much like Cooper's Lunch Lessons site and presents numerous menus, recipes and other tools for improving school food service and, of course, setting up salad bars.

A third person--Sunny Young--is paid jointly by the school district and a grant from the Colorado Health Foundation to coordinate interns and parent volunteers who conduct tastings and otherwise promote Cooper's new menu in Boulder schools.

But Cooper says that if something comes up that needs to be done in the schools, Collins, McMonigal or Young will jump in to help regardless of who actually employs them. "That's the way we work," she said.