Remaking School Food in Boulder: First in a Series 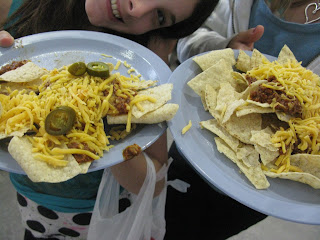 Lunchtime at Casey Middle School and kids jostled in the food line, giggling, pushing, horsing around as usual as they waited to be served the day's entree: a choice of hamburger, or a plate of either beef or vegetarian bean nachos.
Some students who had already passed the cash register with their food stood in front of a bank of microwave ovens determined to add a finishing touch to their plates of corn chips topped with grated cheese. "We like to melt the cheese," one girl explained.
That would be the first clue that something very different is happening these days at Casey and the other 47 schools in the Boulder Valley School District. As recently as two years ago, the cheese on those nachos would have been the processed liquid kind poured out of can. But then just about everything in Boulder's cafeterias has radically changed since Ann Cooper, the famed "renegade lunch lady," took over food service here in fall 2009.
Gone are the chicken nuggets, Bruno's pizza, potato chips and Eskimo pies so familiar to school lunch in the past. Chocolate milk and Powerade also have been scratched from the menu. No more Otis Spunkmeyer muffins, "super doughnuts" or breaded cheese sticks either.
"At one point the middle schools were selling frozen Otis Spunkmeyer cookie dough at the a la carte bars," said Deb McCormick, a registered dietitian who has worked with the school district for the last six years. "The breaded cheese sticks were gut busters."
Suddenly, junk food is out. Now meals are made from healthy and often organic ingredients. Cooper has brought in a cadre of professional chefs--eager to join the budding school food movement--to completely upend the Boulder menu. The district's "lunch ladies," who spent so many years re-heating frozen processed foods and acting as sales clerks for a mind-boggling array of a la carte items, have been re-trained to serve pasta Bolognese and chicken pot pie.
Milk--strictly plain, low-fat and organic from Colorado cows--is dispensed from a self-serve machine that keeps it refreshingly cool. Kids can also pour their own filtered water from tall coolers. Oh, and there is something else utterly new about Boulder's lunchrooms: every one is now equipped with a salad bar, making fresh greens, shredded carrots and cottage cheese available on a daily bsis.

For Boulder parents who chaffed at the highly processed and branded convenience foods that once were emblematic of school meals--some of whom spent frustrating years trying to ignite a school food revolution--the changes Cooper has brought about seemingly overnight are a dream come true.
"I really feel like we couldn't have done it without her," said Robin Luff, a Boulder philanthropist and mother of two boys who, along with her husband Kevin, a Hewlitt-Packard executive, donated $100,000 to the program in the first year through their family foundation. They've pledged another $100,000 in matching funds this year. "Boulder is such a healthy community and here we were selling the kids such crap."
Luff and other supporters see the Boulder makeover--dubbed the "School Food Project"--as a potential beacon for school districts across the country. Already they've helped raise hundreds of thousands of dollars to purchase new kitchen equipment, fund marketing and kitchen training efforts, and pay for computer innovations and other infrastructure work performed by Cooper and her Lunch Lessons consulting group to further the campaign.
But a cloud hangs over their efforts. Not all Boulder kids or their parents are buying the new, healthier version of cafeteria fare. Recently it was revealed that the food services budget was significantly in the red because not enough students are buying the meals.
Cooper has reported a $360,000 deficit in her $6 million food budget for the most recent year.
Some say the new meals are too healthy: kids miss their nuggets and Subway sandwiches. Others say the food still isn't good enough: they don't want their kids eating hot dogs, even if they are kosher all-beef. And still others think it's a mom's sworn duty to pack her child's lunch: they don't want to pay for food from a steam table, no matter how healthy it might be.
"Boulder mothers take pride in how they feed their kids. They're proud to make their kids' lunch," said Luff. "I don't think we spent enough time the first year explaining to them what we were doing and what was expected of them." 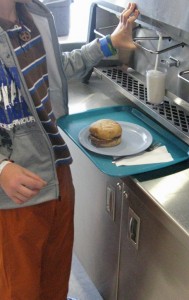 These days Cooper is engaged in a furious public relations blitz to promote the idea of serving freshly-made pizza, shepherd's pie and hamburgers on whole wheat buns. She struggles to sell thousands of families on her belief that the federally-subsidized school meals program can support made-from-scratch food that's not only nutritious and sustainably sourced, but also attractive to kids trained to prefer convenience foods.

"I'm cautiously optimistic," Cooper says. "We really need to raise participation. We're doing everything possible. I think we can get close to breaking even this year."
Cooper's business partner, Beth Collins, who was deeply involved in the Boulder food service redesign and continues to direct the district's food procurement, is more blunt: "If we don't get enough kids buying the meals, they'll have to cut back services."
Recently I spent a week in Boulder as part of my ongoing quest to find the cutting edge in the nation's chronically underfunded and frequently maligned school meals program.
School board President Ken Roberge, meanwhile, says he's prepared to stay the course. "I think this is a work in progress," Roberge said. "We knew all along that there were going to be costs starting up. Ann was very honest about that."

In January, after observing the kitchen operations at my daughter's elementary school in the District of Columbia, I wrote a series of articles detailing how children in the nation's capitol routinely were being fed branded sugary treats for breakfast and lunches centered on cheap, re-heated processed foods churned out by the nation's commodity industry.
In May, I visited the much smaller school district in Berkeley, Calif., where parents had banded together with famed restaurateur Alice Waters to replace re-heated frozen foods with meals cooked from scratch. Ann Cooper was the chef Waters recruited to oversee changes there.
With 48 schools and nearly 29,000 students, Boulder offers a unique glimpse into how a similar makeover might be accomplished on a large scale. Certainly, this particular undertaking is much bigger than anything Cooper has attempted before.
Gramted, Boulder is not your typical school district. The town itself, located about 30 miles north of Denver on the eastern slope of a string of mountains known as the Front Range, is considered among the country's wealthiest and most liberal. Barack Obama received 73 percent of Boulder County's votes in the 2008 presidential election. The nation's highest per capita concentration of software engineers, along with numerous government research labs and the University of Colorado, keep unemployment relatively low. The median family income of nearly $90,000 ranks 12th in the U.S.; the median home price in Boulder proper is more than $500,000. 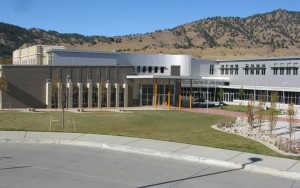 Demographically, Boulder is dominated by a highly educated white population. But Latinos, many living below the poverty line, represent 13 percent of the area's residents. The Boulder Valley School District encompasses not only the low-rise Boulder downtown, but 500 square miles of surrounding suburbs and rural farmland.

Besides delivering food to schools spread over a vast area, Cooper, in an ironic twist, is actually challenged by the district's affluence. One stark reality of the school meals program is that funding cafeterias is much easier in the presence of large numbers of children who, by virtue of meager family income, are eligible for free or reduced-price meals under the federal subsidy scheme.
Currently, the U.S. Department of Agriculture pays schools $2.72 for each fully-subsidized meal, $2.32 for each partially subsidized meal, and 26 cents for every meal that students purchase "full price."
In the Boulder Valley School District, only 18 percent of children qualify as "free and reduced," meaning that most students must open their wallets to eat in the subsidized meal line. Last year, after replacing re-heated frozen foods and a la carte treats with freshly prepared meals, Cooper managed to sell 72,000 more meals in urban Boulder than were sold before she arrived on the scene. But those sales were offset by a decline of some 52,000 meals sold in the outlying areas east of the city. Meanwhile, eliminating junk food from a la carte offerings took a $900,000 bite out of cafeteria revenues.
"The struggle here is that families can afford to send their kids to school with lunch," said Cooper.
To break even, she must bring at least 1,000 more students--or about 30 in each school--into the program. Figuring out how to convince suburban and rural kids to buy a hot lunch, rather than bringing one from home or eating out, is key to her success.
In the coming days, I'll detail how Cooper has gone about transforming school food in Boulder, the people who have joined her cause, and innovations that other school districts might look to for inspiration in changing the food served every day to some 31 million of the nation's children involved in the federally-funded school lunch program. 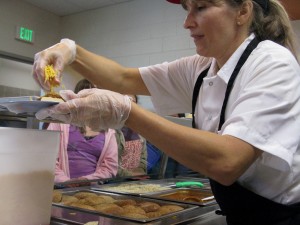 As I watched lunch unfold at the newly renovated Casey Middle School, where nearly 45 percent of students are eligible for free or reduced-price meals, school principal Alison Boggs arrived to monitor the scene. When I asked her to reflect on the food the kids used to eat, she said, "It pained me. It was hard to watch."

Obesity and weight-related diseases such as diabetes, hypertension and atherosclerosis strike hardest among low-income minority groups. At Casey, 42 percent of students are Latino, and 45 percent qualify for free or reduced price lunch. Last year the vast major of meals dished up in the Casey cafeteria--75 percent--were served to low-income children.
Boggs pointed to one overweight student in the lunch line and said, "Every day you'd see her eating pizza, fries, chips and a strawberry milk." She finds the redesigned food much healthier.
"Some of the kids are going through such growth spurts it's really critical they get the right food," she said. "At our school, the response has been tremendous."
Next: How a chance encounter and tacos for dinner sparked Boulder's school food revolution.
Posted by Ed Bruske at 6:00 AM