Breakfast in the Classroom 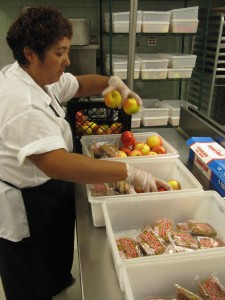 Columbine is one of five schools in Boulder where breakfast is universally free and served in the classroom. Twenty-two blue plastic packing boxes represent all of the school's classes. On this day, Traverton would be loading each with plastic containers filled with apples, cartons of low-fat milk, and a breakfast bar called "Cherry Apple Crunch." 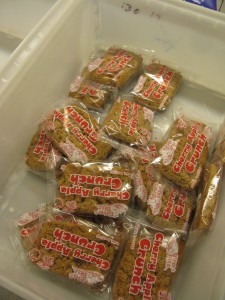 The federal government pays schools $1.76 for each breakfast they serve to a student who qualifies for a free meal based on family income, and $1.46 for each student who qualifies for a reduced-price breakfast. Schools with high enrollment of low-income children, such as Columbine, where nearly 80 percent of the children are Hispanic, thus bring in a high return of funds if breakfast is served to everyone, as they most assuredly are when breakfast is served in the classroom.

Increasingly, schools see breakfast in the classroom as a way of making sure that students are focusing on their studies, instead of a on rumbling in their empty stomachs. And as I wrote when I spent a week in Berkeley schools, breakfast in the classroom can help pay for lunch when a school district is populated by a high percentage of low-income students. In Boulder, only 18 percent of students qualify for free or reduced-price meals, which helps explain why breakfast is served in the classroom in only five of the district's 48 schools. 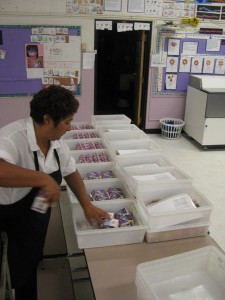 Still, I wanted to see how this was done. So I tagged along as Traverton went about her business, first covering several tables in the cafeteria with plastic containers and filling those with the milk, the apples, the breakfast bars, then loading these into the blue bins, then trucking the bins around the school on a flatbed trolley.

Traverton is a relative newcomer to the Boulder kitchens. Previously, she was home-schooling her teenage daughter when the daughter essentially pushed her out of the house. "She was taking courses online and didn't want me around," Traverton explains. She found a job as a "nutritional assistant" at Columbine, and quickly moved up to cook. An avid cook at home, she keeps some 800 family recipes on an Excel spreadsheet. "I knew this was something I could do."

Now she manages the kitchen, working five-and-a-half hours each day. "We're all part-time around here." 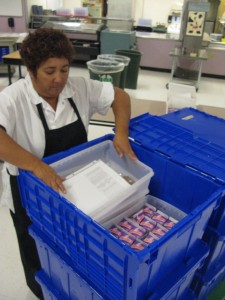 As I would soon learn, filling the breakfast bins involves a lot of stooping and lifting. Traverton makes fairly quick work of it. She has her system down.

Some parents have expressed concern about breakfast served in the classroom cutting into valuable instructional time. At Columbine, the start of the school day was moved up 15 minutes, from 8:30 to 8:15, to make extra time for the morning meal. Still, some teachers allow the children to eat while they proceed with their lessons. Many schools report that when breakfast is served in the classroom, children are less apt to act out, that absenteeism and visits to the school nurse drop.

"There's been a lot of positive feedback that the kids have better attention span and fewer behavioral problems," Traverton said. 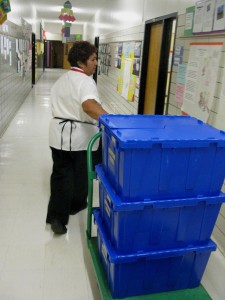 I followed Traverton as she rolled her cart through the school's hallways, depositing the blue bins outside the classroom doors. As the children arrived and settled into their classrooms, teachers brought the bins inside and distributed the milk, the apples, the breakfast bars.

Inside each bin is a sheet of paper listing the children assigned to that particular class. The teacher marks the children who take the meal, which usually means all of them. Later, Traverton or one of her kitchen assistants will enter the information in their computer, data that later will be sent to the U.S. Department of Agriculture as part of Boulder's request for reimbursement under the school meal program. 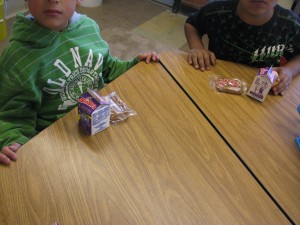 Breakfast in the classroom: simple

Inside the classrooms, I see the children contentedly eating their breakfast. Sometimes they don't finish the entire meal and save it for later. 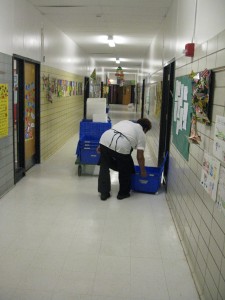 Teachers then deposit the empty blue bins back in the hallway. Traverton returns with her trolley and collects them.

Soon, it will be time to make lunch.