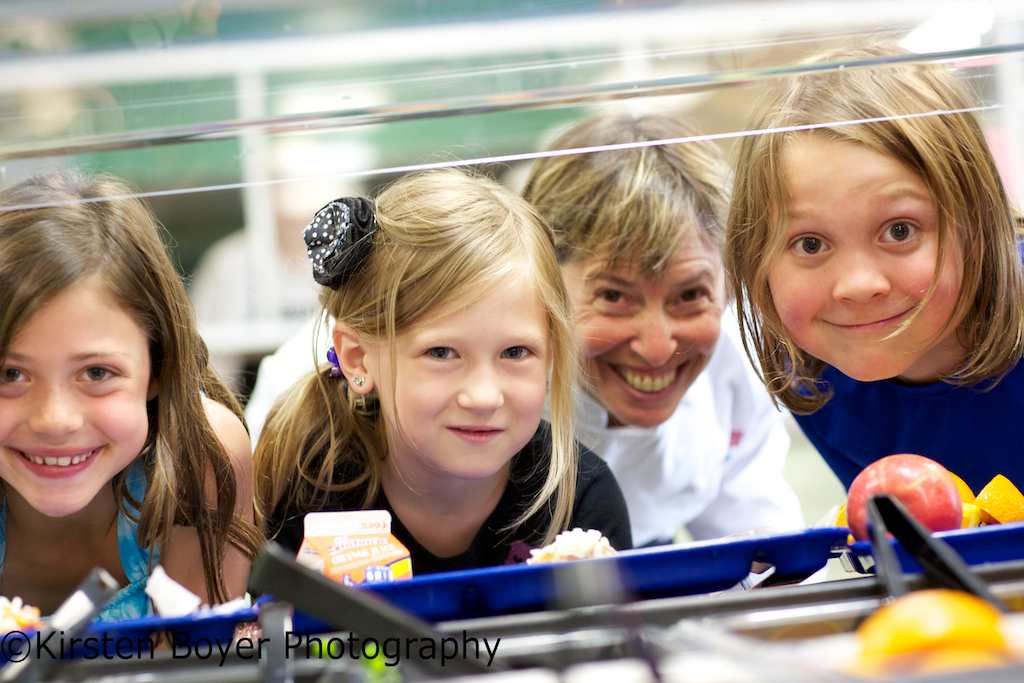 Ann Cooper with some of her young salad bar fans

Ann Cooper is conducting a clinic in Boulder on how to rescue school food. Is anyone paying attention?

In remaking the lunch line in Boulder schools, Cooper has revealed the federally-subsidized school meals program as living somewhere in the stone age. Not merely under-funded, school kitchens are woefully under-managed and under-equipped to function in a digital age. No wonder they constantly run in the red. Schools are incapable of serving real food any more because they are mired in lack of imagination, lack of will and above all lack of professional know-how when it comes to producing meals with recognizable whole ingredients.

In other words, Cooper has proven that serving better food in school is not just about getting a bigger handout from Uncle Sam. Turning out wholesome meals, as opposed to the re-heated junk so many school districts pass off as food, can be done on the current budget. But getting there takes guts, hard work and brains--hardly the qualities that win advancement in public school bureacracies.

Why do schools need a hired gun like Ann Cooper to get the job done? Why are school food service directors so often the greatest obstacle to progress? In case after case, school district after school district, it is the career school food functionary who digs in her heels and shouts, "It can't be done! Kids won't eat healthier food! We have to feed them junk to make our program work!"

It's not just about money: where better school food is concerned, leadership is in critically short supply.

Cooper explodes the myth embraced by so many school food service directors that they must offer cheesy soft pretzels, Subway sandwiches, corn dogs and Eskimo pies to make ends meet. One of her first acts after taking over in Boulder was to abolish the a la carte foods the schools were serving. And it wasn't just because the food was bad. Trying to operate cafeterias like convenience stores, she found, was a drain on resources that did not yield the bounty that is popularly assumed.

"When you really look into all the loss in product, the storage problems, the waste, the time needed for invoicing, the staffing requirements, we don't believe it's really profitable," said Cooper. "And it takes away from the core mission," which is, of course, nourishing children.

Removing a la carte took a big bite out of Cooper's cash flow. But here's the surprise: She's recovering by selling better food and more of it. Her success is all the more remarkable because kids in Boulder do not depend on federally-subsidized meals. Only 18 percent of them qualify as low income. Should Cooper realize her goal of making her reformed food service self-sufficient in Boulder, it will be because kids actually like her home-made enchiladas and salad bars and can get along without Otis Spunkmeyer cookies and Gatorade every day. By implication, modeling after Cooper would only be easier in urban school districts where enrollment of low-income children is much higher.

Revamping school food is not for sissies. To wring waste and inefficiency from Boulder cafeterias, Cooper pushed long-time "lunch ladies" into a purely supportive role, cut deeply into their work hours, and brought in a crew of professional chefs to do the actual cooking. In the process she tapped a potentially vast reservoir of trained kitchen talent who would gladly sign on to the school food revolution--if only there were a revolution to sign on to.

Not everyone agrees with this approach. Kate Adamick, a widely-traveled school food consultant who is a friend and occasional co-worker of Ann Cooper's, believes that lunch ladies--or "lunch teachers," as she prefers to call them--are the solution, not the problem. If we took the time to train them, and gave them the proper equipment, Adamick insists, they could serve meals cooked from scratch in schools coast-to-coast.

"The reality is that virtually no school district can afford the luxury of what the Boulder school district has," said Adamick. . "Ninety percent of this battle will be won if we can restore the pride and self respect of the lunch teachers. Our responsibility is to provide those people with the skills they need. "

Doing so, Adamick admits, would take much longer. Cooper chose not to wait.

Can the nation's school children afford to wait? If there's any one message that rings loud and clear from my travels through three very different school districts over the past year it is that waiting for a solution from the federal government is a fool's game. Congress has shown itself remarkably resistant to the idea of adding even a few pennies more to the school food budget. The U.S. Department of Agriculture, charged with administering the meals program, is a monument to bureaucratic inertia that seems better suited to enforcing its vast web of rules than pointing the way forward--unless that involves helping corporate interests put their brand of industrially processed foods on kids' cafeteria trays.

It would be hard to think of another government program so vital as school lunch that is subject to as much lip service and window dressing posing as reform. Michelle Obama's high-profile attack on childhood obesity, while generating lots of buzz around vegetables and school gardens, has driven white-jacketed chefs into paroxysms of grade-school cooking demonstrations, but thus far has failed to yield a political mandate for overhauling the nation's cafeterias. The School Nutrition Association, while ostensibly safeguarding the gustatory well-being of the nation's school children, is a relic of the last century, corrupted by industry influence, dishing out reheated chicken nuggets, pushing kids to drink more chocolate milk.

Indeed, in all three of the school districts that I have observed at close hand--the District of Columbia, Berkeley Calif., and now Boulder--change has not been handed down from Washington but has bubbled up from within outraged local communities. It takes parents, school administrators and local elected officials fed up with horrendous school food to turn things around. In the case of Berkeley and Boulder--communities primed for a school food uprising--Ann Cooper happened to be the catalyst who set radical change in motion. She not only knows how to do it, she has the charisma and leadership qualities to make it happen. In Boulder, parents were not only ready for Cooper, they had the deep pockets to make her vision a reality.

Unfortunately for the nation's other 15,000 school districts, there's only one Ann Cooper. Or maybe there's a solution we just haven't imagined yet.