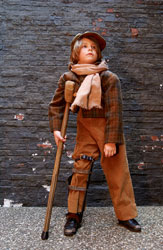 Charles Dickens could not have written a more sinisterly cruel plot.

Having given D.C. kids a huge break by putting better food on school cafeteria trays, outgoing Mayor Adrian Fenty and the D.C. Council are now poised to snatch it away in order to balance the city's budget.

Fenty has targeted nearly $4.7 million in funds designated under the Healthy Schools Act to pay for healthier breakfasts and lunches and to encourage schools to use locally grown products in school meals. In August, when the current school year started. the effect of the bill was immediately apparent. Not only did fresh, local fruits and vegetables appear on kids' trays for the first time in recent memory, but more kids were eating the meals because the schools started serving breakfast in the classroom. The Healthy Schools bill also paid extra for lunches so that low-income children who are entitled to reduced-price meals didn't have to.

Fenty's budget proposal, aimed at balancing a $188 million shortfall in the District's coffers, would erase all of that, threatening a giant step backwards at the very moment it appeared the city was making real strides in its struggle with the health crisis known as childhood obesity. Healthy Schools placed D.C. at the forefront of jurisdictions trying to rescue kids from junk food. Fenty would send us backsliding into rank indifference.

But just when you thought the mayor couldn't look any more Scrooge-like in this Christmas season--snatching food out of kids' mouths--his budget maneuver smacks odiferously of bait-and-switch. The $4.7 million in question consists of tax revenues that were supposed to be specially designated for the Healthy School initiative. At least that's what we were told.

If you'll recall, during the many months D.C. Councilmember Mary Cheh spent writing and hashing out and holding hearings on the Healthy School legislation, the nagging question arose again and again: where would she get the money to pay for it? Cheh vowed that she would find the cash, and just weeks before the bill was to come up for a vote she proposed a controversial excise tax that would have raised the price of soft drinks.

The so-called soda tax would have produced more money than Cheh actually needed, raising the prospects for all kinds of new programs, like school gardens, while also taking a bite out of obesity by discouraging people from drinking sugar. But the beverage industry was having none of that. They scuttled the soda tax. Undeterred, Cheh managed to get the funding she needed by convincing the Council to extend the city's 5.7 percent sales tax to sodas, which previously had been treated like food--meaning not taxed.

As best we can determine, that's the money Fenty would take out of the D.C. Public Schools food budget and use elsewhere. We're waiting for Cheh to scream bloody murder, but so far we've heard barely a whimper: "I’m trying to be open-minded about this," she told The Washington Post last week. "If everyone is going to feel the pain, everything is going to be on the table.”

Now it's up to the Council to decide which version of Christmas D.C. schoolchildren will have. Will there be real food on the table? Or will Tiny Tim find a lump of coal in his Yuletide stocking?

Hearings on the budget are scheduled for Tuesday.