Taking the Stigma Out of School Lunch 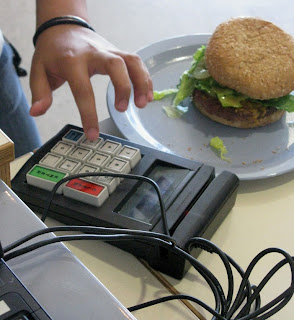 In addition to the food prescribed by the federal government for subsidized meals--meat, vegetables, grains, milk--many schools offer a wide variety of fast food items on the theory that these will boost sales and help finance struggling food service programs. These foods can be sold "a la carte" or even in vending machines alongside the subsidized meals as long as the proceeds accrue to the school meals program.

Because some students would rather not eat than be singled out as poor, the U.S. Department of Agriculture prohibits schools from requiring special tokens, maintaining separate serving lines or otherwise identifying students who qualify for free or reduced-price meals. Thus, hot meals and a la carte items are intermingled in so-called blended lunch lines. Ideally, cash never changes hands. Instead, students either pay in advance into cafeteria accounts, or are identified by a computer as being entitled to free or reduced-price meals. In Boulder, students simply enter a six-digit personal identification number into a point of sales device when they exit the lunch line, as shown in the photo above. 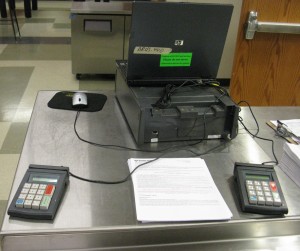 A kitchen employee monitors the transaction on a computer screen, while also checking to make sure that meals contain the necessary components to qualify for federal subsidies. To speed service and shorten lines at the steam tables, Boulder also has installed software that allows two students to check out simultaneously.